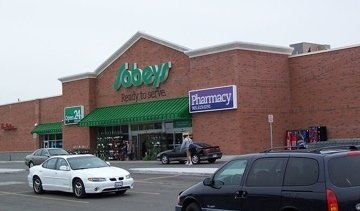 Local 175 of the United Food & Commercial Workers (UFCW) began a legal strike action at the Sobeys retail support centre in Milton, Ontario on February 11, and are currently operating a picket line at the DC. The workers were in a legal strike position after rejecting a final offer from the company on February 10. The two parties had negotiated for 13 days.

According to a statement issued by the union, “workers rejected Sobeys’ final offer because the company wanted a nine-year contract term, which would limit the ability of the union and workers to go back to the table to resolve any matters for that duration. Other issues at stake include the company’s attempt to erode contract language including the excessive use of part-time workers, which in turn results in fewer full-time jobs.”

DurhamRegion.com, a news website operated by Metroland Media, publisher of Whitby This Week, reports workers are also picketing outside the retail support centre operated by Sobeys in Whitby, Ontario.

Sarah Stover, a spokesperson for Sobeys Inc in Ontario, says there is no actual strike in Whitby. “The union sent some picketers over to Whitby from Milton”.

According to Stover, the Milton facility is “not fully operational” due to what she categorizes as a labour disruption, but says the company has a contingency plan in place to ensure Sobey’s grocery stores will continue to receive shipments.

There are 480 employees at the Milton DC, and of those, 412 are union members.

Union members have voted to end their strike action. On March 12, 2013, the UFCW posted the following announcement on its website:

“The 428 bargaining unit workers at Sobeys Milton Retail Support Centre have ended their strike after 29 days on the picket lines. At meetings held on Monday, March 11, the members voted to accept an offer with improvements over the previously rejected settlement.

“Members have returned to their regularly scheduled work as of today.”