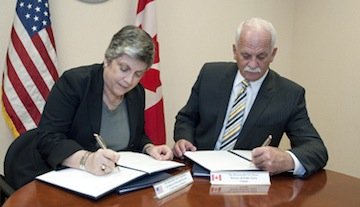 WASHINGTON, DC—Canada and the US have taken one more step toward harmonizing cross-border and Customs procedures.

The two countries, represented by federal minister of public safety Vic Toews and US secretary of homeland security Janet Napolitano, have signed a Memorandum of Understanding (MOU) which will eventually lead to the establishment of a US Customs and Border Protection (CBP) truck cargo pre-inspection pilot project on the Canadian side of the border.

Although the full details have yet to be finalized, government officials did release some information about how the pilot will operate. The program is being implemented in two phases with the first phase being implemented at the Pacific Highway crossing between Surrey, British Columbia and Blaine, Washington. The purpose of this phase is to test the basic concept of pre-inspection.

The second phase will occur at the Peace Bridge crossing between Fort Erie, Ontario and Buffalo, New York. Its purpose will be to determine how pre-inspection can improve border efficiency and reduce wait times.

“The pilot announced today will test the concept of conducting primary inspection of U.S.-bound truck cargo in Canada in order to better manage our shared border and improve economic opportunities for Canadian manufacturers and their U.S.-based supply chain partners,” said Toews.

As part of the program, the governments have promised to work with and consult key industry members.

One such stakeholder, said he can see some advantages to the program.

According to David Bradley, president and CEO of the Canadian Trucking Alliance, “being able to have primary inspections conducted on one side of the border, or what we used to call reverse inspection, could be of benefit at some land border crossings where efficient border clearance is impaired by geographic constraints on one side; so the signing of the MOU is very significant.”

He added that this announcement might help to clear up some confusion in terminology that has occurred recently.

“Sometimes people were using terms like pre-clearance or pre-inspection, when really what they appeared to be talking about was pre-screening, which implies two stops for a truck where currently there is one. Obviously, that would raise some concerns for us. [The] announcement seems to make clear we are talking about primary inspections; we and the provincial associations in the affected crossings look forward to working closely with the government agencies and infrastructure operators on both sides of the border in the design and implementation of this project.”