US sequestration could slow border crossings and cargo inspections 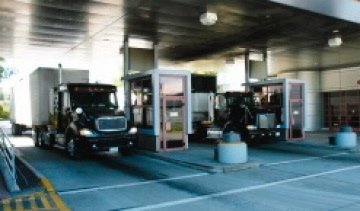 WASHINGTON, DC—Janet Napolitano, the Obama administration’s homeland security chief, warned that the US spending cuts known as sequestration will cause pain for Canadians, in particular at the busy Canada-US border.

“Sequestration will be felt up there because there’s only a few big crossing places for trade on the Canadian-US border and they’re really important crossing places,” she said.

“In fact, trade-wise, they’re probably the Number one or two crossing places in the world. As sequester evolves and we have to furlough people who are port officers, and not fill vacant positions, and not pay overtime, we’re unfortunately going to see those lines really stretch.”

The equivalent of 5,000 border patrol agent positions are on the chopping block, due to the mandatory cuts, Napolitano noted.

“It means less overtime and the ability to hire port officers, so longer lines there. It means really the same at the TSA (Transportation Security Administration). So longer lines there,” said Napolitano, who buried her head in her hands when asked about the impact of sequestration on her growing department.

On Friday, March 1, $85 billion in immediate reductions were automatically enacted for this fiscal year, and currently US federal departments and agencies are in the process of implementing their budget-slashing plans.

In addition to the 5,000 border patrol agents, US Customs and Border Protection is preparing to reduce its work hours by the equivalent of 2,750 inspectors as well, meaning cargo inspections at the border could drag on interminably for Canadian exporters.

Obama administration officials have warned of serious delays for air travellers, too, as a host of control towers and airports are shuttered, creating a ripple effect across North America.

Napolitano chided lawmakers for demanding her department commit more resources to border security and other public safety measures while failing to prevent the sequester.

“Trying to do both at the same time is really an impossible task,” she said.

Sequestration took effect after US Republicans refused to make concessions to Democrats on raising revenues or closing tax loopholes. The failure of the two parties to come to an agreement meant the cuts—which had been put in place as part of the Budget Control Act of 2011 (BCA) to deal with the debt ceiling crisis—were automatically implemented.

Throughout the course of the now-failed round of discussions about the cuts, President Obama assailed Congress for its failure to compromise and work out a deal to head-off sequestration. In a speech to workers at a ship-building factory in Virginia, he called sequestration “a dumb way of doing things” that threatens to stifle the fragile US economic recovery and erode the country’s military preparedness.

“The longer these cuts are in place, the greater the damage,” he said.

US Customs and Border Protection

In light of the cuts, US Customs and Border Protection (CBP) has posted a notice on its website explaining how it will prioritize services under sequestration.

“In preparation for operating under sequestration, CBP has redirected resources toward only the most critical, core functions within the Office of Field Operations” and has discontinued or postponed certain important but less critical activities in an effort to reduce budget expenditures… The cuts tied to the sequestration will be made equally across our agency, with no preference by port of arrival.

“The first, immediate cuts will reduce overtime beginning March 1st, and personnel furloughs may begin in mid-April. CBP managers at the field offices and ports of entry conducted an in-depth analysis of their operations to identify any current activities, duties, and hours of operation that could be adjusted to mitigate the impact of the significant reductions in expenditures mandated by the sequester. However, given the magnitude of the reductions, we currently estimate that there may potentially be delays up to several hours at land border crossings, passenger processing times may increase by about 50 percent, and there may be up to an additional five days added to cargo inspections at ocean ports of entry.”

For more details are available on the CBP website.