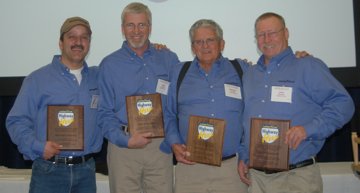 LOUISVILLE, Kentucky: Every year the Goodyear Tire and Rubber Co honours truck drivers and operators who perform heroic acts on the highway.

This year, the company recognized the actions of four individuals, including Melville Farnell of Shelburne, Ontario, as deserving of nominations for the Goodyear Highway Hero Award.

In May 2011, Farnell was driving for Tupling Farms Produce Inc when his transport truck was hit head-on by a car traveling in the opposite direction, which resulted in Farnell’s rig jack-knifing. The impact also caused a fuel leak in the truck, which spilled diesel onto the highway.

Despite being shaken from the collision, Farnell noticed the other car had come to rest in a ditch and the driver was in a semi-conscious state. Farnell approached the car, broke the driver’s side window and pulled the much-larger motorist to safety, just before the car exploded.

His fellow nominees also performed rescues that saved people’s lives. One pulled a driver out of a car that had fallen into a pond and was sinking. Another saved an elderly couple who had been trapped for hours in a car during a snowstorm.

The eventual winner of the award, Mike Schiotis of Spring Hill, Tennessee, faced a less common danger: an armed gunman.

Schiotis, is a driver for Seville, Ohio-based Panther Expedited Services Inc. He was driving through Pennsylvania in November when he noticed a woman walking along the road followed by a man closely behind her. Thinking they were injured, he slowed his truck down to have a better look. That’s when he noticed the man had the woman at gun-point.

At that point, Schiotis stopped his truck. The woman came up to it, started banging on the door and is reported to have screamed, “Help me! He’s going to kill me!”

According to Goodyear, Schiotis, jumped out of his truck and positioned himself between the woman (who was already bleeding from the head) and her assailant.

Schiotis helped her into his rig and decided to take her to the next truck stop. That decision, however was soon altered as the gunman got into a car, which was stopped at the side of the road, and began chasing the truck.

Schiotis notified the Pennsylvania State Highway Patrol of the situation. He also put the word out via CB radio to his fellow drivers, alerting them of what was happening. Another trucker, who was nearby, caught up with Schiotis, pulled his rig alongside. The pair of drivers then drove together in a way that blocked the gunman from closing in on on Schiotis and the intended victim. This action gave the troopers time to catch up to the man’s car and arrest him.

“We are grateful to Mike Schiotis for his quick thinking and brave actions,” said Phillip Kane, vice-president of Goodyear Commercial Tire Systems. “He literally put himself ‘in the line of fire’, and in all probability, prevented a tragedy from taking place. Mike’s decision to interject himself into this dangerous situation is a powerful example of the selflessness and professionalism exhibited by many of today’s professional truck drivers. Because of his action, a life was saved. For this, Mike Schiotis has earned the right to be called a hero.”