Railroad proposed for Ring of Fire 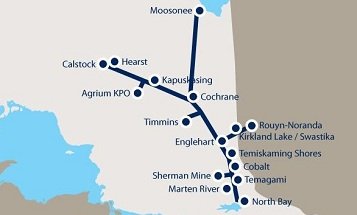 NORTH BAY, Ontario—There may be a new railroad in northern Ontario, if a proposal being put before the federal and provincial governments is adopted.

The plan, which was unveiled by the General Chairperson’s Association, the organization which represents unionized employees at Ontario Northland Transportation Commission (ONTC), proposes that the assets and ownership of ONTC, a provincial agency that operates more than 1,100km of track and provides passenger and freight rail, bus and telecommunications services to northeast Ontario communities like North Bay, Cochrane and Moosonee, be turned over to a newly created ports authority, The James Bay and Lowlands Ports Trustee Corporation, which operates under the Canada Marine Act.

The plan was developed in response to the Ontario government’s March 23, 2012 decision to divest the ONTC, which was followed by the shutdown of ONTC’s Northlander passenger train service on September 28, 2012.

Under the new ownership, ONTC operations would be evaluated for economic sustainability, and where needed, improved and financially strengthened.

In addition, a new Ring of Fire rail line would be designed and built in order to transport the thousands of tonnes per day of chromite, nickel and other minerals being mined in the James Bay Lowlands.

“This is a new deal for Northern Ontario,” said Brian Stevens of the General Chairperson’s Association. “Not only will we save transportation services and hundreds of existing jobs in the North, but our plan will also create thousands more jobs by providing access to the Ring of Fire.”

“I am very pleased about the opportunity for First Nations people to get involved in the development of the Ring of Fire,” said Leo Friday, deputy grand chief of the Mushkegowuk Council. “We are ready to work together for the benefit of First Nations people. An important part of this will involve training and education so that Aboriginal workers can gain access to the full range of future employment opportunities at Ring of Fire mines.”

Toronto, Ontario-based mining company, Canada Chrome Corp, which has secured a right-of-way to mine in the area, is also involved in the project.

“Canada Chrome’s work has been instrumental in building a solid base from which our plan can move forward,” said Roy Hains, CEO of the James Bay and Lowlands Ports Trustee Corporation.

“With broad and building support, I am confident that this initiative is well on its way to success. We are particularly excited about providing access to the Ring of Fire with a rail solution that is by far the most economic and environmentally friendly solution. This plan also keeps these important infrastructure assets in public hands for the benefit of all stakeholders,” said Hains.

Currently, the ONTC, which has been in operations since 1902, employs over 950 people and has an estimated annual economic impact of almost $210 million in Northeastern Ontario.