Pascale Daigneault, of Sarnia, Ontario, has been reappointed as the chairwoman of the Federal Bridge Corporation Limited for a term of five years. She was first appointed for a two-year term as chairwoman in May 2019. She was previously director and vice-chairwman of the FBCL Board in 2015, when the organization was newly amalgamated. During that tenure, she has led the Governance, Policy and Human Resources Committee. She is a former president of the Ontario Bar Association and a former director of the Canadian Bar Association and of the Canadian Bar Insurance Association (Lawyers Financial). Daigneault specializes in personal injury law in Sarnia, Point Edward, and all of Southwestern Ontario with Fleck Law. 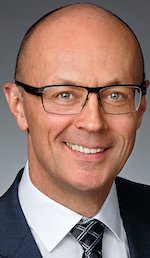 Markus Wolf took over responsibility as managing director of Interroll Conveyor GmbH in Mosbach, Germany, along with both associated Global Centers of Excellence, Conveyors and Pallet Handling. Most recently, Wolf was the chief operating officer of a mid-sized drive shaft manufacturer, managing its seven production and assembly sites in Germany. He holds a diploma in Industrial Engineering and Economics and has been working for more than 25 years in the automotive industry at Mann+Hummel. Besides his 10 years of international experience in operations, which included assignments in Brazil, he has a background in purchasing, sales, marketing and project management.

Phantom Auto has hired Stephen Collins as chief financial officer. Before Phantom and over his more than 30-year career, Collins has served as a C-level leader and director for many software companies, including DoubleClick and Bazaarvoice. The company also hired Nils Alstad as vice-president, product and customer success. Before Phantom, Alstad was vice-president of customer experience at Canvas Technology, a warehouse autonomous robotics startup that was acquired by Amazon in 2019.

Motion Industries has hired Aurelio Banda as group vice-president of automation. Banda most recently served as president and CEO of PHD Inc., a  manufacturer of electric, pneumatic and hydraulic industrial automation actuators. Previously, he served as president and CEO – North America for Beckhoff Automation. Banda was also the owner, president and CEO of Controls Plus, Inc., an automation distributor. He previously worked in sales with Motion Automation, Inc., and Bosch Rexroth’s Electronic Controls & Drives. A graduate of DeVry University with a degree in Applied Science in Electronics, Banda furthered his education with an MBA in Finance & Operations from Notre Dame and completed Harvard Business School’s General Management Program.