Patent granted to down drones for safety

Flirtey has developed a system to deploy parachutes

February 11, 2020
by Inside Logistics Online Staff

February 11, 2020
by Inside Logistics Online Staff 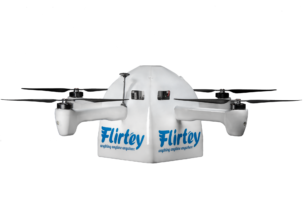 RENO, Nevada – A U.S. last-mile drone delivery service has been granted a patent to improve public safety around the airborne robots.

Flirtey has received a patent that recognizes the ability of a drone’s technology to detect an error in operation while the drone is in flight, ultimately deploying a safety mechanism – such as a parachute – if necessary. This action helps reduce risk of contact and/or injury to bystanders, while also sparing the unmanned aircraft.

According to the patent description, “The technique includes a parachute deployment system (PDS) that can deploy a parachute installed in a drone and land the drone safely. The parachute may be deployed automatically, e.g., in response to a variety of failures such as a free fall, or manually from a base unit operated by a remote user.

“For example, the PDS can determine the failure of the drone based on data obtained from an accelerometer, a gyroscope, a magnetometer and a barometer of the drone and automatically deploy the parachute if any failure is determined. In another example, the remote user can “kill” the drone, that is, cut off the power supply to the drone and deploy the parachute by activating an onboard “kill” switch from the base unit.”

Flirtey has also developed and patented a safety and anti-tampering system so that if someone pulled on the delivery tether, the tether has the ability to detach from the drone.

Flirtey holds over 25 patents, granted and pending, in the United States and worldwide.