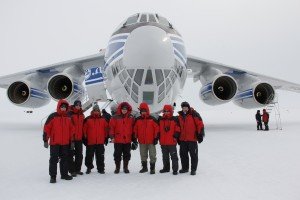 On the ground in Antarctica

Volga-Dnepr Airlines has completed its first-ever ‘air drop’ by parachuting 208 barrels of fuel from an IL-76TD-90VD freighter onto a remote airfield in the Antarctic. The delivery, from Novo, will be used for inland scientific missions, vehicles and small airplane operations.

The 34-ton shipment was placed onto 26 special parachute platforms and was dropped from a height of 500 metres through the aircraft’s rear cargo door at a pre-selected site.

“This unconventional delivery formed part of the IL-76TD-90VD operational tests we conducted in November, which proved the aircraft’s capability to successfully complete aerial cargo drop missions in virtually any remote regions of the South and North Poles, as well as in mountainous and forest environments,” said Sergey Kostin, senior specialist for IL-76 fleet modernization at Volga-Dnepr Airlines.

Volga-Dnepr has also obtained an addendum to the IL-76TD-90VD airplane flight manual to enable it to operate to ice airfields and transport up to 90 people aboard the aircraft. Volga-Dnepr is able to provide a ‘passenger service’ to Antarctica by fitting removable seats into the cargo hold as required.

“To date, the joint crew on board these flights has comprised test pilots from Russia’s State Research Institute of Civil Aviation (GosNII GA) and Ilyushin Design Bureau and technical personnel from Volga-Dnepr Airlines. So far, we have operated five return flights connecting Cape Town and Novolazarevskaya Station. It is safe to say that performing our first air drop in such austere conditions has already demonstrated a wider operating scope for the commercial IL-76TD-90VD freighter than we had expected to confirm during our field trials in the Antarctic,” Kostin added.

The aircraft has been operating in the Antarctic since November 2015 when it made its first landing on an ice airfield and performed a series of ‘ice runs’ to check the performance and thrust reverser application procedures. The airlift-and-drop solution was provided by Volga-Dnepr Airlines as part of a new Antarctic project run by the Antarctic Logistics Centre International (ALCI).