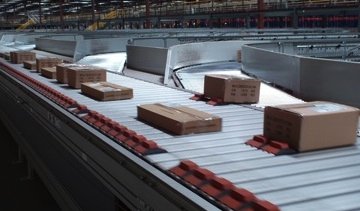 GRAND RAPIDS, MICHIGAN: Dematic, a supplier of logistics systems for the factories, warehouses and distribution centres, has introduced Automatic Speed Control, a new control solution that automatically adjusts the speed of the entire sortation system from merge through the sorter take-away conveyors to accommodate actual throughput volume. Automatically adjusting the sorter speed reduces energy use, wear on equipment, sound levels and maintenance requirements, Dematic said. Automatic Speed Control extends the life of the sorter and conveyors and improves package control, the company said, while reducing the cost to operate.

The sorter automatically adjusts to the throughput demand as it changes throughout the day.  If there is a surge or decline in flow, Dematic said, the sorter automatically speeds up or slows down to efficiently accommodate the variable rate. With Automatic Speed Control, the sorter does not run continuously at full speed throughout each shift of operation since actual demand vacillates in most warehouse operation, thus saving energy.

“There are multiple applications for Automatic Speed Control in most operations,” said Ken Ruehrdanz, Dematic’s distribution and warehousing market manager. “In a typical configuration, electronic sensors on the upstream conveyor network detect inbound volume. For a shipping application, electronic sensing monitors downstream availability. If the shipping operation is waiting for more truck trailers or is temporarily under staffed, the sorter can slow down to accommodate.”

In that situation, the Automatic Speed Control functionality allows the system to refrain from sorting high volumes of throughput to shipping when only a moderate flow can be accepted.