Hydrogen proves its worth

Genco ATC reaps the benefits of hydrogen for forktrucks 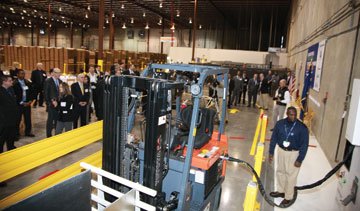 Two and a half years ago, Pittsburgh, Pennsylvania-based Genco ATC began a pilot project with hydrogen fuel cell-powered forklifts. The company used just two of the forklifts to gauge whether the equipment was worth the investment.

Turns out it was, and in February this yearGenco ATC unveiled a fleet of 27 hydrogen-powered forklifts at its South Carolina distribution centre (DC). Genco manages the 450,000-sqf DC for its client, Kimberly-Clark.

The unveiling was about more than the hydrogen-powered forklifts. Genco also revealed a hydrogen fuelling station that not only provides the facility with hydrogen fuel, but also provides hydrogen to government agencies to power their vehicles, says Pete Rector, Genco’s executive vice-president and chief technology officer. The fuelling station project is a result of collaboration among Genco, the county and state governments, and a number of commercial organizations. For Genco, it also meant an innovative way to share the station’s cost.

Rector predicts in five years the fuelling station will be a “pretty active place”, as other local companies have expressed interest in adding fuel cell technology to their forklifts or adding vehicles equipped with it to their fleets.

In fact, most experts in the field expect the fledgling industry to grow—though they’re not quite sure how quickly or by how much. Dave Ghosh and Alan Guest are with the National Research Council Institute for Fuel Cell Innovation, based in Vancouver. Ghosh is the director of science and technology and Guest is hydrogen and fuel cells national program coordinator.

Ghosh says there are about 18 companies in North America using hydrogen fuel cell technology in forklifts today. Ten years ago there were none. The latest statistics from the Freedonia Group, says Guest, show total world demand for hydrogen fuel cells was US$510 million in 2009. Ten years ago it might have been under US$20 million. By 2019, world demand for fuel cells will be approximately US$3 billion.

“It’s a very rapidly growing field,” says Guest. “Ten years ago there was a lot of expectation and a lot of promise but now in 2011 that promise is starting to be realized.”

Eric Jensen, director of new technologies, research and development for New Bremen, Ohio-based Crown Corporation, says five years ago in the US you could count all the hydrogen fuel cell forklifts “on two hands”. Today, he says, “there’s probably more than 1,000, which is really small potatoes compared to the rest of the industry. In North America there are about 90,000 electric forklift sales per year.”

Adopting hydrogen fuel cell technology—including having hydrogen trucked in—over lead-acid batteries can be a costly proposition. To make the move worthwhile, companies do need a minimum number of forklifts and two or three shifts in their operations. For companies that can do it, the technology offers several advantages and, says Guest, companies can expect a return on their investment in two years or, at the most, between three and five years.

Fuel cells are more costly than lead-acid batteries. An average battery is about US$4,000, while a fuel cell costs 10 times that amount. But each forklift needs to have three batteries and each of those batteries will last about four years. Fuel cells need to be refreshed after three years, but the cost is much less. So over a 10-year span, companies may find the costs of batteries equal to the initial cost of a fuel cell.

For Genco, Rector says the technology fits with all three areas of the company’s sustainability policy: good for the environment, good financial sense and socially responsible. It also freed up valuable space in the warehouse, since the company could tear down the battery room. Now there’s just a hydrogen dispensing station on the wall.

Through the company’s pilot project, Genco also discovered the technology was much more productive than lead-acid batteries. As energy from the battery is used up, the forklift moves slower and lifts less weight. Hydrogen-powered forklifts, however, “stay the same for the entire shift”, explains Guest. As fuel is used up, “you don’t have a decrease in capability”.

Forklift operators also don’t have to spend time changing batteries during their shift. Jensen says operators might spend anywhere from 20 to 45 minutes on a battery changeout. Rector adds that not having to change batteries means Genco has picked up 15 minutes to a half hour per shift.
“It doesn’t sound like a lot but it’s probably somewhere in the area of five percent productivity—which is pretty big,” he says.