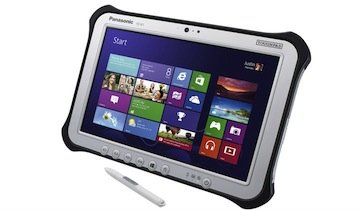 The devices, which are suitable for use in distribution centre environments, come in two sizes, seven or ten inches.

The Toughpads carry the MIL-STD-810G durability certification—a US Department of Defence standard that incorporates tests for drops, waterproofness, temperature and other adverse operating conditions.

The Toughpad FZ-G1 is a ten-inch model that runs on Windows 8 Pro (and is downgradable to Windows 7 Pro). It weighs 1.1kg (2.43lbs), runs on an Intel i5-3437U vPro with 1.9GHz (which can be increased to 2.9GHz using Intel Turbo Boost). The FZ-G1 offers the choice of a 128GB or a 256GB solid state drive (SSD) and either 4GB or 8GB of RAM. A micro SDXC is optional. It includes two cameras: a front-facing 720P webcam and microphone and a 3MP rear autofocus camera with LED light. Battery life is eight hours.

The ten-inch FZ-A1 runs on Android 4.0 and uses a Marvel 1.2GZ dual-core processor. It weighs one kilogram (2.1lbs), has 16GB ROM, 1GB RAM and a micro SDHC. The front camera is a 2MP webcam with a microphone and the rear camera is a 5MP autofocus with an LED light. Battery life for the FZ-A1 is 10 hours.

The smaller Android table, the JT-B1 is a seven-inch model also runs on the 4.0 version of the OS. It has a TI OMAP4460 1.5GHz dual core processor, 16GB ROM, 1GB RAM and a micro SDHC. It comes with a 1.3MP front camera (with microphone) and a 13MP rear camera with autofocus and an LED light. The JT-B1 weighs 544g (1.2lbs) and its battery lasts for eight hours.

Integrated 4G LTE mobile broadband and barcode reading technologies can be added as options to all models. The Windows 8-based FZ-G1 also includes the option to add an additional USB port, a 10/100/1000 Ethernet port, a smart card reader, a serial port (key for field service applications), or a larger solid-state drive. Hardware encryption, root protection and FIPS compliance are available in various configurations of the Toughpads for enterprise level security.