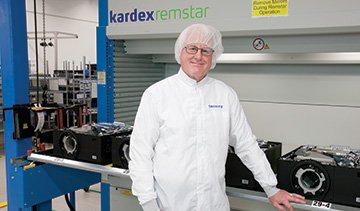 Historically, the act of projecting a movie has been a relatively simple and low-tech process: shine a light at a series of sequential images captured on film stock and those images would display on a screen. It was a strictly mechanical process that relied on the quality of the film medium and the skills of the projectionist.

But the days when fragile, expensive-to-transport film reels were shipped from movie palace to movie palace are quickly disappearing. Now the act of showing a movie involves transferring digital files to multi-screen theatres and using complex and expensive digital projectors to convert the data into images.

Christie Digital is one of the world’s leading manufacturers of digital projectors (both of the 2D and 3D varieties), not to mention large-scale video displays used in public venues (such as conference centres, offices or museums), and medical imaging equipment. The company, which traces its roots back to the projection systems division of Electrohome Inc (which was purchased by Christie in 1999) employs over 1,400 people around the world and over 500 in Kitchener, Ontario. Kitchener serves as the manufacturing and engineering headquarters for the company, which has projectors delivering images to over 28,000 screens around the world.

To see video of the Kardex Remstar VLMs in use at Christie Digital click here.

According to Screen Digest, a UK-based market research and consultancy organization, the market for digital projectors essentially began in 2005, and Christie was there at the beginning.

The beginning is when Philip Hibberd came in. A senior manufacturing engineer at Christie Digital, Hibberd says when he began working at Christie, the business was in transition.

“Five to six years ago the whole business switched to digital projects and our volumes ramped up radically. And then space became an issue,” he says.

“When I was hired into this company—three engineers were hired at the time—we were to transform it and make it a modern manufacturing facility. When I first came, we had no semblance of what you see here today,” he says.

Today there is a bright, modern shop floor populated by workers dressed in white from head to toe. They sport hair nets, safety goggles, and lab coats or jump suits. To make it easier to for employees to access the stored projectors (or load new units into the VLM) a sliding tray whisks the inventory into the open and away from the storage unit.

The people working in the lab put together eight basic models of projectors, which in turn can be customized into 20 different configurations, according to the needs of the customer.

“We developed a build-to-order program,” says Hibberd. “We build the projectors to 90- to 95-percent completion. Then we hold the projectors in storage. When a customer places an order, we configure the base unit and ship it within 24 hours—all out of the KW [Kitchener-Waterloo] shop.”

Once the projectors are assembled they need to be stored somewhere, which becomes a problem given the size of the units. The basic projector head for a model designed to work on 32-metre screens measures 1194mm by 635mm by 483mm. Even a smaller unit designed for 10-metre screens has dimensions of 697mm by 688mm by 395mm. On any given day Christie has approximately 200 projectors waiting final configuration.

“We looked at various storage solutions, including racking and carts, but the materials handling side of things got messy. It wasn’t ergonomic,” says Hibberd. Rather than storing the partially finished projectors in carts on the shop floor, the company opted to use a vertical storage solution, and purchased a Shuttle VLM from Kardex Remstar. Of course, given the type of manufacturing being performed and the location, Christie had to do some investigating to see if the unit would be suitable for its needs.

“Our sampling showed the machine was more than suitable for the Class 10,000 cleanroom environment, but if we had put it in the Class 1,000 room, that would have been a whole different ball of wax. Upgrades would have been needed,” says Hibberd.

“We had to do load factor tests on the floor before installation, to see if it could take the weight of the machine and contents. We had to know what was underneath the floor. It’s an old building.

“There were two 600-volt power cables located. We repositioned them a couple of feet over. One was dead and one was live. Had we not done the scan, potentially we could have had one of the installers drive a support through the cable. They used ground [penetrating] radar. It goes down a couple of feet. The core samples taken for lab testing go down about seven feet. We had to make sure the ground was stable and see how thick the concrete slab is.”

Once Christie received word the building offered a suitable foundation for the VLMs, getting the system installed didn’t take long.

“From the time we placed the order to installation, it was three to four months,” says Hibberd. “The standard size is 8ft by 10ft. If you get a standard, you can source it directly. Ours was non-standard, so they had to source it from the manufacturer in Germany.”

“We installed it off shift. That way we were able to control the environment. We put up plastic walls around the area. Drilling the support holes was the messiest part. There are eight support holes. You’re not allowed to have cardboard or paper in a Class 10,000 cleanroom, so we had to unpack it outside. Once the pieces were on the floor it became a glorified erector set. It takes about three days to build and a couple of days to calibrate and balance the machine. After a week it was ready to be handled. It took one day to fill with inventory. The week after we installed it, we were in full operation.”

The VLM has an automatic sliding tray that extends beyond the exterior of the unit, which brings the projector closer to the worker. Since the projectors weigh 23kg (50lbs), on average, they are too heavy for a single worker to lift manually so Christie designed and installed a hoist to help. Weighing 23kg (50lbs) the projectors are too heavy for a single person to easily manipulate, so Christie designed and built a hoist to handle the units.

“The weight of the projectors make them not ergonomically safe for one person to lift it on their own, and you don’t need two people. With the lift assist, one person can handle everything,” says Hibberd.

The software that controls the VLM is able to take into account Christie’s first-in-first out system and references the manufacturing date of each projector before delivering one to the waiting employee.

The company was satisfied with the first VLM, and installed a second one two-and-a-half years after the first purchase. It stands side by side with the original model.

“The business expanded and we rolled out new models, so we needed more capacity,” says Hibberd.

Currently there are four people fully trained to operate the VLMs, but two primary operators work most shifts.

Four months ago Christie installed its third VLM in the Kitchener facility, but this one entered the stores section of the building and instead of holding nearly finished projectors it holds stock items and parts. The stores VLM has a slightly different configuration from the shop models. It lacks the sliding tray and measures 4m by 3m by 4.9m (13ft by 10ft by 16ft). Hibberd says that at this point it holds about 1,000 SKUs.

“It’s almost fully loaded. We’re not under any pressures, so we’ve taken the time over the last six to eight weeks and trained our personnel how to operate it,” he says, adding that the training program takes about two days to cover everything from setting up stock locations to inputting items.

“At the moment there are about six people trained on it but there are two people who are the primary operators. Everybody cross-trains here.”

There is other main difference between the shop VLMs and the stores unit is the stores one will be integrated with Christie’s ERP system. “We use JD Edwards for manufacturing inventory, inventory control, work order issues, and labour tracking. Integrating the VLM with JD Edwards will speed up the process of work-order-picking. As we load it with raw components, that will go to JD Edwards.” (The VLMs have a light picking system to direct the worker.)

As with the shop floor VLMs, tests had to be conducted to ensure the stores floor was capable of supporting the VLM safely. It wasn’t, so a concrete pad had to be installed first, and before that was done, Hibberd was already planning for the future and for the installation of a second VLM.

“We put the pad in so we can go up against the existing machine. We don’t need to leave a space between them.”

And that very likely won’t be the last VLM purchased by Christie.

The finished goods DC located in Cyprus, California (where the company’s head office is) has two VLMs. An off-site warehouse in Kitchener also has two, and the company is considering installing a third. Putting the VLMs in the Kitchener warehouse meant Christie was able to avoid closing the facility down and relocating to somewhere larger, explains Hibberd.

Christie uses a first-in-first-out system, so the VLM's software needs to take into account the manufacturing date before it plucks a projector from storage.

“Now the topic of moving doesn’t come up. If we need room we say ‘let’s create space for another Remstar.'”

The VLMs, which Hibberd says cost roughly $100,000 each when installed, require maintenance every three months. In particular the belt tension needs regular adjustments.

“The VLM trays going up and down all day long can stretch the belt, but in essence they have not let us down at all,” he says.

“During the initial stage, all of the breakdown calls resulted because we pushed the wrong button. Somebody forgot their training. And nine out of ten times the problem could be fixed over the phone. The majority of the problems were software related.”

Hibberd says he likes the fact that Johnston Equipment has the service contract for Kardex Remstar, since it means “the guy who comes in also fixes our forklifts.”