The first of six sites will be deployed by the second quarter of 2014. 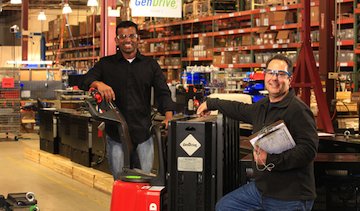 LATHAM, NY—Walmart Stores, Inc is rolling out a Plug Power hydrogen fuel cell solution to power electric lift truck fleets at six North America distribution centres. The first of six sites will be deployed by the second quarter of 2014.

Further purchase order terms for the multi-site order initially announced on February 10, 2014 include:

GenDrive hydrogen fuel cells can contribute to an increase in productivity. Workers spend less time fueling a forklift truck as compared to changing a lead-acid battery, resulting in less downtime. GenDrive fuel cells also have no exhaust emissions so that they can be a component in implementing corporate environmental initiatives.

“We are pleased with the performance of the hydrogen fuel cells that we have been operating and are excited to expand our program with Plug Power,” said Jeff Smith, senior director for Walmart Logistics.

“This agreement is a tripling of Walmart’s commitment to Plug Power’s fuel cells, and is encouraging because it comes from a company with so much experience using our product,” said Andy Marsh, CEO at Plug Power.

Walmart currently has 535 GenDrive fuel cell units in operation at sustainable refrigerated distribution centres, including two sites in Canada and one in the United States. Specifically, Walmart’s Balzac, Alberta fresh food distribution centre is the most energy-efficient distribution facility of its kind in North America. Additionally, the Walmart Washington Courthouse distribution centre in Ohio was the launching point of the GenFuel business.