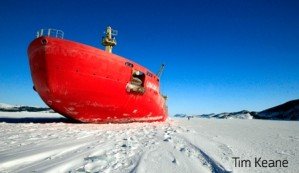 Quebec City, Quebec—Fednav recently celebrated the 100th voyage of its bulk-carrying icebreaker, the Umiak I in Quebec City in the presence of the officers and crew of the vessel.

The ship shuttles all year round between Vale’s mine in Voisey’s Bay, Labrador, and the Port of Quebec, despite exceptionally difficult ice conditions during the winter months. Fednav acknowledged the crew’s professionalism in the presence of representatives of Vale, the vessel’s ship managers—Canship, the Port of Quebec, and local partners.

The Umiak I is the bulk most powerful icebreaker in the world, Polar Class 4 and has the largest engine of a Canadian-flagged vessel. The Umiak I navigates in the ice covered waters of the Canadian North twelve months a year, without the need for an escort, and can operate in extreme conditions.

It is capable of navigating at a continuous speed (3 knots) in 1.5 m ice. The only vessels that operate in the Canadian Arctic all year round are owned and operated by Fednav Limited (Nunavik, Umiak I, and Arctic).

Its engine can deliver 29,600 hp, three times the power of a conventional bulk carrier of the same deadweight. Enfotec Technical Services, a subsidiary of Fednav provides up-to-date information on ice conditions through its IceNav navigation system to the Umiak I on all the winter voyages.

Since entering service in 2006, the ship has transported the entire production of nickel ore concentrate from the Voisey’s Bay mine and has returned from Quebec City with machinery, food, and other essential goods to supply the mine and its staff.

“Fednav is pleased to celebrate this important milestone,” said Paul Pathy, President and Co-CEO of Fednav Limited. “This represents Fednav’s commitment to mining development in northern Canada, and ongoing support to our partner, Vale.”