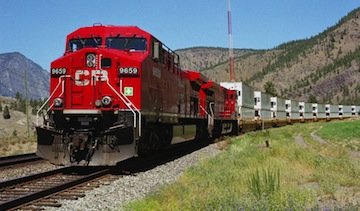 Terror is a bigger threat than derailments, says Hunter Harrison.

CALGARY, Alberta—CP has launched what it calls a new premium intermodal service that promises to shorten the transit time between Toronto and Calgary.

According to the company, the new service cuts 20 hours from previous schedules, meaning a trip between the two cities now takes 64 hours to cover the 3,400km distance.

Ed Greenberg, a spokesperson for CP, says the company has achieved this through an assortment of means.

“First of all, we have reviewed all scheduling across CP’s network to ensure efficient train meets and coordination, which includes building trains with blocks of cars for specific intermodal long-haul destinations, reducing the number of stops and streamlining the connections these transcontinental trains make en route to final destination. We have also been working with customers for more efficient origin and destination management,” he said.

“Capital projects and investments in key corridors of our network in the last number of years have contributed to the overall efficiencies, as well.”

CP says shortening the time on the Toronto to Calgary route is just a continuation of practices begun last year, when it reduced the travel times between Vancouver and Chicago and Vancouver and Toronto.