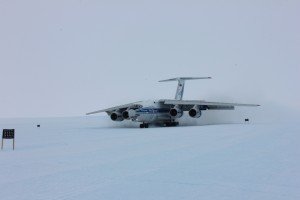 Novolazarevskaya Antarctic Research Station—A Volga-Dnepr Airlines IL-76ТD-90VD has made its first landing on an ice airfield in Antarctica, opening up significant opportunities to support exploration projects on the continent.

The aircraft completed a series of runs on the runway to check performance capability and define the engine reverse thrust application range, and in doing so extended Volga-Dnepr’s flight operations to all seven continents.

Flight checks were performed in order to incorporate amendments to the IL-76ТD-90VD’s Airplane Flight Manual (AFM) for ice airfield operations. After the amendment of its AFM, the IL-76ТD-90VD airplane will be approved to operate to Antarctica airfields.

Georgy Sokolov, Sales Director of Volga-Dnepr UK, said: “Obtaining approval to fly to adverse weather regions expands Volga-Dnepr Airlines’ operating boundaries. Active exploration of the Arctic and Antarctic regions is currently underway, and with the IL-76ТD-90VD airplane meeting ICAO’s existing and advanced requirements, and, most importantly, being fitted with environment friendly engines, it will provide a reliable transport solution for our customers. We have already started implementing a major project in Antarctica for Antarctic Logistics Centre International.”