TSB required CN to change the way it reports accidents 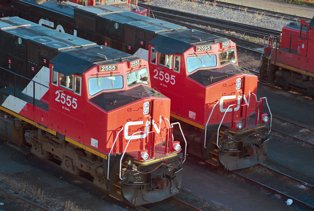 TORONTO, Ontario—During a six year period, CN failed to disclose over 1,800 derailments to the Transportation Safety Board (TSB).

The CBC discovered the TSB figures during its ongoing investigation into rail safety in Canada. According to its research, “The TSB found a total of 1,843 unreported derailments, including 44 main-track derailments, over a six-year period”.

The CBC describes the most of the accidents as having occurred “inside rail yards” and being “minor” in nature,” but notes that “some involved damaged rail cars, locomotives and track, including a 2005 derailment of a car on a main track near Fort Langley, BC that broke 11 rails and a damaged a switch. In 2002, seven cars derailed at a Toronto-area CN yard destroying a rail switch and damaging 110 metres of rail.”

The broadcaster says the TSB originally became suspicious of the railway’s accident figures after comparing its numbers to those of its competitors. When it couldn’t get satisfactory answers from CN, or access to its data, the CBC reports “the safety watchdog agency took an unprecedented step and issued a statutory summons in June, 2006 to CN Rail requiring it to turn over its complete safety records.”

According to CN, the situation arose due what it calls a “difference of interpretation” regarding the reporting regulations.

“TSB accident reporting criteria require the railway to exercise judgment as to what accidents should be reported,” said CN director of communications and public affairs Mark Hallman in a written statement issued to MM&D.

He added that the following section of the regulation regarding reporting criteria is at the heart of the situation.

“‘[R]eportable railway accident’ means an accident resulting directly from the operation of rolling stock, where […] (b) the rolling stock […] (iv) sustains damage that affects its safe operation, or (v) causes or sustains a fire or explosion, or causes damage to the railway, that poses a threat to the safety of any person, property or the environment….”

In his statement, Hallman explained, “These criteria require a determination as to what ‘poses a threat to safe operations’ in minor accidents. CN reports all accidents involving Dangerous Goods, all accidents involving passenger trains and all significant accidents to the TSB properly and in a timely way. More significant accidents leave less room for interpretation. However, in the case of minor incidents that do not involve Dangerous Goods or passengers, good faith differences of view are possible in determining what constitutes a ‘threat to safe operations.'”

According to both the CBC report and CN, the railway and the investigatory body eventually were able to come to terms on how exactly reporting should occur.

“While parties can disagree, the important matter is how they resolve disagreements. In the end, this constructive exchange led CN to revise prior accident filings for the years 2001 to 2006 in a way that fully satisfied the TSB. The agency also expanded its monitoring approach to include a new emphasis on severity indices to help better frame rail accident trends in Canada,” said Hallman.

John Cottreau, a spokesperson for the Transportation Safety Board of Canada said the organization realized that under-reporting might be occurring when it took a hard look at the data it compiled on rail accidents.

“We analyze our statistics to look for trends. We thought that there might be a trend of missing reports,” he said.

When the TSB became confidant about what was happening—after looking at all of CN’s accident data—it reached out to representatives of the rail industry.

“We met first of all with the Railway Association of Canada,” he said.

“Along with them, we met their membership. We clarified what exactly the [Railway Safety] Act said and what our expectations were pursuant to the wording of the Act. So everybody had the same information. We tried as much as we could to make clear what the reporting requirements were and what the TSB’s expectations were.”

According to Cottreau, ensuring everybody understood the rules was enough to prevent similar situations from occurring.

“Everybody has a clear understanding of what’s required by law. We do, from time to time, review our statistics and look for trends. We figure everybody is reporting.”

“The only thing we can do is sanction people with respect to the Canadian Transportation Accident Investigation and Safety Board Act. And that would mean we would go to Federal Court and ask them for a sanction,” said Cottreau.

As to why word of the reporting discrepancy is only now making news, Cottreau insists the TSB was open about what had happened.

While the adjustment to the numbers may have been publicly disclosed, CN’s name was not released by the TSB.