At 16,022 TEUs the CMA CGM Marco Polo will set records in Canada and the U.S. East Coast

The 16,022-TEU CMA CGM Marco Polo will set a record on Monday, May 17, 2021, with a stop at the Port of Halifax, becoming the largest containership to berth at a Canadian port. 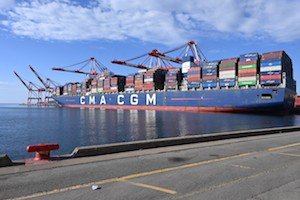 The CMA CGM Marco Polo sets a record on May 17, 2021, as the largest containership to berth at a Canadian port

The ship will then break the U.S. East Coast record when it calls in New York on Thursday, May 20.

According to the Port of Halifax’s schedule, the ship is set to arrive at 6pm Atlantic time Monday, at the South End Container Terminal (PSA Halifax).

The previous record was held by its sister ship, the CMA CGM Brazil, which arrived at PSA Halifax in September 2020. It is 366 metres long, 51 metres wide and has a capacity of 15,072-TEUs.

CMA CGM will choose three winners per port city. The fifteen winners will be invited on a tour of the ship during its next port call in the applicable city. Contest rules can found here.

The CMA CGM Marco Polo is a massive ship. With a length equivalent to more than 3.5 football fields, the containers fitting on the vessel would span nearly 100 km if placed end to end.

In addition to the Canada and U.S. East Coast records, the CMA CGM Marco Polo will set individual big-ship records at every port it visits on the North American East Coast. This includes Port of Halifax, Port of New York and New Jersey, the Port of Virginia on May 23, the Port of Savannah on May 26), and the Port of Charleston on May 28.

The CMA CGM Marco Polo is sailing on the company’s Columbus JAX service, travelling from South Asia to the East Coast of America. The debut of the vessel on the JAX reflects an increase in capacity to meet unprecedented boosts in e-commerce sales and the resulting increased demand for goods.

“This milestone would not be possible without the efforts of our port partners on the East Coast, said Ed Aldridge, President of CMA CGM America and APL North America.

“Their intelligent, timely infrastructure improvements to support larger ships make it possible for us to proactively respond to the needs of our customers.”