by Inside Logistics Online Staff August 3, 2021

Gebrüder Weiss has stepped up to sponsor the logistics of getting equipment across the Atlantic for a team competing in a hyperloop competition. 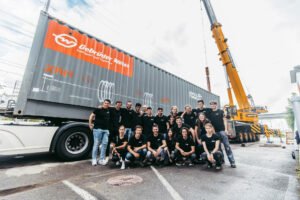 It is supporting the “Swissloop Tunneling” research team at the Swiss Federal Institute of Technology (ETH) in Zurich. The ETH team is involved in technical development of the Hyperloop high-speed transport system.

With a sponsored land and sea transport from Dübendorf in Switzerland to Las Vegas, Gebrüder Weiss is ensuring that the research team can participate in September at the Not-A-Boring Competition, with its high-tech drilling robot. The Hyperloop competition will involve drilling a tunnel as quickly and accurately as possible.

The idea behind the Hyperloop project, based on a concept developed by Elon Musk, is to transport people and goods at very high speeds over shorter distances through tunnels under or above the earth’s surface.

Swissloop Tunneling and eleven other teams qualified from among 400 applicant teams to participate in the competition. They have to complete a 30-meter-long tunnel with a diameter of 0.5 meters, including a passable tunnel surface and a precise control system, using a self-constructed drill.

Faster than a snail

To make tunneling financially viable, the drilling robots required must be as fast, compact and automated as possible. The conditions set by Elon Musk for the high-tech scientific race in Las Vegas are challenging. As a reference, for drift velocity, he has specified the speed of a snail, which should be surpassed if possible.

“As a provider of future-oriented logistics solutions, we have to start thinking today about how we can ensure the freight mobility of tomorrow under economically feasible conditions. The Hyperloop project may still seem somewhat exotic to us today, but it promises feasible solutions for the mobility requirements of the future,” said Lothar Thoma, managing director Air & Sea at Gebrüder Weiss.

Stefan Kaspar, founder and co-president of Swissloop Tunneling said, “Questioning existing transport systems for people and goods and looking for feasible alternatives – our vision is nothing less than to revolutionize tunneling and help a technology achieve its breakthrough. With the logistical support of Gebrüder Weiss, our vision is one step closer to becoming reality.”

Swissloop Tunneling is a team of students from the Swiss Federal Institute of Technology (ETH) Zurich researching and developing Hyperloop technology. The team unites more than 40 students from several technical disciplines.