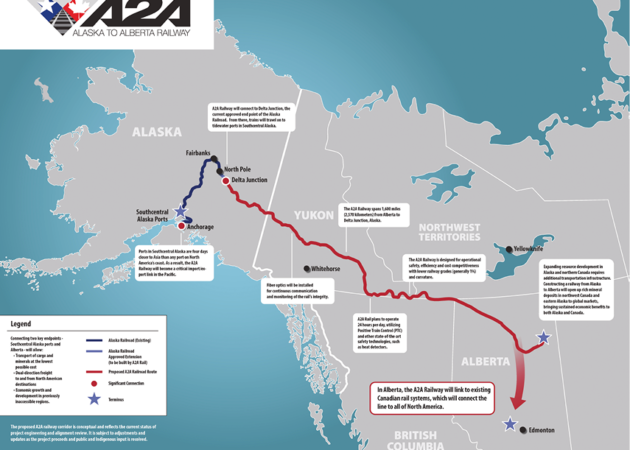 Physically it’s still nothing more than a line on a map, but in three years the Alberta to Alaska (A2A) Railway will begin moving cargo. That’s two years ahead of schedule, a timeline that has compressed at least partly because of the Covid-19 pandemic.

In an interview, chairman and founder Sean McCoshen shared an update on the 2,500-kilometre railway project that will see cargo and passengers move between Fort McMurray, Alberta, and tidewater ports on Alaska’s south-central coast. The railway will consist of new rails between Alberta and the Alaska border, connecting there to the existing Alaska Railroad under a 70-year exclusive agreement.

The A2A project was formally founded in 2015, but the notion of a railway connecting the Canadian interior with Alaska is nothing new. In fact, the Alaska Highway, which winds from Dawson Creek, British Columbia, through Whitehorse, Yukon, to Delta Junction, Alaska, was proposed in the 1920s and built during World War II, partly to support the construction of a railroad that would ensure supply to Alaska after the Japanese began the Pacific front with the attack on Pearl Harbor, Hawaii.

However, when the war ended the project was shelved for economic reasons; there just wasn’t the population in the north to warrant the cost of such a large infrastructure project.

Now, however, with the development of the Alberta oil sands, massive Canadian grain exports and booming trade with Asian countries, the economics have changed and the project is moving forward. In the summer of 2020 the company began the surveying process, which McCoshen said at the time meant “we are now officially ‘boots on the ground’ here in Alberta”.

This survey is done from the air, comparing the route that has been planned with the typography to fine-tune the routing around hazards, engineering roadblocks or communities that don’t want the railway passing through. The process takes three to six months, building on years of engineering studies done before.

Already supported by the Alberta, Northwest Territories, Yukon and federal governments in both Canada and the U.S., the pandemic has increased their interest in seeing the railway come to fruition. “I’m really surprised,” McCoshen said. “I think Covid-19 and the horrendous toll that it’s taken on the economy and jobs has actually assisted us in terms of governments wanting to see us get up and running a lot quicker.” He pointed to the projected 28,000 jobs the project will generate as a big factor in the growing government support.

Likewise, the railway will improve the quality of life and reduce the cost of living for numerous northern communities. According to McCoshen, communities and supporters along the route want to see it happen, want to participate, and want the railway to come through their communities because they want the jobs and the business that it’s going to bring, but they don’t want to wait five years for it. “There’s no internet, there’s no running water, gas has to be flown up for heating. It’s really quite incredible, but we’re going to adjust all that, and this is the whole point of this,” McCoshen said.

McCoshen likened the scale of the project to the Hoover Dam in the U.S. or the Channel Tunnel that connects the U.K. to France. “The last significant construction project similar to this in Canada was the building of the CN Railway,” he noted.

That scale means the “headaches go from whether or not you’re investing in something that’s going to see a return, whether or not people are going to accept the idea, to other issues, and now it’s kind of more along the lines of a regulatory construction issue.”

He was quick to add that with the huge team of top bankers, lawyers, consultants, and government relations and lobbyists, “it’s a joy working on this. I do not mince words here: Is there a problem every single day? Yes. Is there a problem every 15 minutes? Yes. But you just get into a mindset of working through things, and adjusting accordingly, and making the business open to change. That’s what we’re doing.”

The railway was conceived to transport bulk commodities including oil, grain and ore in addition to containerized goods. Customers have already signed up to move their goods over the A2A lines with agreements that will be formalized as the opening day approaches.

“We have a breakdown of products, there’s a significant amount of export traffic through Tidewater in Alaska, and there’s also a significant amount of input product too, through containerized goods. The population is growing, consumption is growing, and the transportation network that we have, both in the United States and Canada is getting stretched…and there is no one dominant cargo in this thing,” McCoshen said.

In relation to that ‘stretched’ rail infrastructure, he stated flat out that the railway will not be competing with CN and CP for West Coast traffic. “I think they would probably use some of our lines. We’re not going to compete with them, it’s that simple. We’re a completely different route. I think some of their routes will hook up to our routes, and we’ll do business together like any other competitive environment, but…they arguably have pretty good routes right now themselves, so I don’t think they’re worried at all.”

However, the A2A website claims that South-central Alaska ports are four days closer to Asia than any other North American port, and that this will facilitate lowest-cost transport of cargo.

The need for speed

With timelines compressed from five down to three years, McCoshen has been feeling the pressure. “When it went from five years to three years, a lot of people thought ‘hey, you must be really happy’. Not necessarily,” he said.

The shorter horizon doesn’t mean there are fewer pieces to put in place; it just means they have to get done all at once. “Rather than doing one study at a time, we may be doing six studies at a time, this kind of thing. We’re doing our best to satisfy the government’s demand to get this going and hire people to start construction,” McCoshen noted.

But what this means is “a $300 million annual budget for x is now a $600 million annual budget because you’re taking what you were going to do in three years, and bringing it down into a year and a half. One thing I think people need to understand is there are no set timelines for any of this stuff. There is simply a to-do list that you have to do, and if you do the to-do list in one month, great, and if it takes you five years then that’s fine too.”