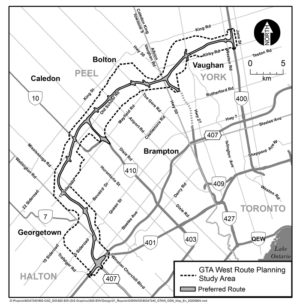 Peel Region alone is home to an estimated 2,000 trucking companies, and in 2012 accounted for about 36% of the province’s truck trips, according to regional government estimates.

But keeping the trucks on the move is an increasing challenge. They’re sharing regional roads and highways with an ever-growing population.

If the population expands as expected, traffic congestion is expected to increase 45 percent by 2041 – representing an additional 190,000 vehicle trips during a typical weekday rush hour.

Ontario and the City of Brampton have each unveiled plans to keep the trucks moving — but only one of them involves traffic lights.

The province has revived plans to develop a new GTA West Corridor, unveiling the preferred route for the 400-Series highway that would cut through York, Peel and Halton Regions. That would include up to four to six lanes from Hwy. 400 in the east to the Hwy. 401/407 interchange in the west.

Brampton has a decidedly different vision, as it plans how traffic will flow through an area known as Heritage Heights. Its vision replaces a stretch of the GTA West Corridor with a 104-meter-wide boulevard with defined spaces for pedestrians, a truck-only lane, and also a series of intersections.

“It will actually have 17 intersections, and then the stopping and the starting,” says Steve Snow, vice-president of sales, customer service and marketing at Maritime-Ontario Freight Lines. “What is the purpose of a 400-Series highway when we have to stop and go, stop and go?”

The city council led by Mayor Patrick Brown sees it as a better way, with the mayor saying in a press release that the approach is part of a sustainable community needed to maintain a high quality of life.

“As Brampton’s last undeveloped area, Heritage Heights is an exciting opportunity to make it right from the start. I am confident that this concept plan will do just that, bringing jobs, affordable housing, and the opportunity to live, work, learn and play in Northwest Brampton.”

(The mayor’s office failed to take advantage of numerous requests for an interview on this story.)

Brampton’s business community has been highly critical of the municipal plan. In an open letter to council, the Brampton Board of Trade said the omission of a true 400-Series highway “brings into question the projected benefits of the project and significantly compromises a much-needed element of regional supply chain infrastructure.”

Citing a 2012 GTA West Corridor Transportation Development Strategy Report, it noted that a GTA West Corridor could generate a billion-dollar economic impact in annual GDP as early as 2031, and improve commercial vehicle travel times during peak period, supporting just-in-time deliveries. The number of truck delays on inter-regional facilities would be cut in half, representing around 2,800 vehicle hours during afternoon peak hour, and reduce the truck traffic using local roads by about 25 percent.

The potential benefits don’t end there.

“Why would council approve a boulevard that’s essentially a bottleneck along the GTA West Corridor?” he asks, scoffing that a 104-meter boulevard would ever be pedestrian-friendly. “Even if you were Usain Bolt, there’s so much going on here for you to get across the street in a pedestrian-friendly way, to support businesses here, it’s a stretch.”

There would be other options to incorporate the boulevard just two blocks away, along Heritage Road, and not compromise the central supply chain, he adds.

Letts is highly critical of the council position, saying that it puts planning ideology ahead of household incomes, and points to a flip in positions that saw the municipality support a highway in 2019 and then replace it with a “bottleneck boulevard.”

He is encouraging the province to shut down the concept right away, for fear of seeing similar proposals emerge from other municipalities that may overlook broader transportation demands.

“This council seems to like to find every opportunity to fight with the province,” he adds.

Ontario Transportation Minister Caroline Mulroney didn’t immediately dismiss the city’s proposal when approached by Today’s Trucking, and focused on the collaboration to come between different levels of government.

“We’ve announced that route and developed that route in partnership in collaboration with our different partners including the municipalities that are affected,” she said. “We’ll continue to listen to our municipal partners, to what they’re looking for with respect to new transportation corridors, and I’m sure those conversations will continue.”

But Ministry of Transportation staff clearly see a disconnect between what the city wants and what the GTA West would propose.

“The corridor must meet provincial standards for design and operating speeds, access, interchange design and separation, and other 400-Series highway geometrics,” said senior issues advisor Michael O’Morrow, in a written response to questions.

“Our preliminary review of the proposal put forward by Brampton City Council suggests that the proposed roadway design is not compatible with the province’s functional and operational objective.”

A related Environmental Assessment report found that there were opportunities to optimize the existing transportation network, but also identified the need for a new highway to address future transportation demands, he said.

Where to from here?

Still, we are years away from actually pouring asphalt.

The related study of the corridor is scheduled to be completed in 2022, with a planning and preliminary design phase leading up to an Environmental Assessment. There’s plenty of work that would follow that before a highway takes shape. There’s the surveying, soil testing, determining construction material needs, and design details for everything from interchanges to bridges.

“Currently there is no commitment to a timeline for additional design and construction. The timing and duration of highway construction depends on numerous factors, including size and complexity of the project, funding availability, procurement method, and timing of environmental clearances and permits,” O’Morrow said.

For some members of the business community, it can’t come soon enough.

“Almost one in three jobs in Brampton owe itself to the logistics sector,” Letts said. “This asset is required not only now, but was required 15 years ago.”