Anatomy of a pivot

By the end of June 2020, GM Canada had delivered upwards of 650,000 facemasks to Health Canada. The masks were manufactured at GM’s car assembly plant in Oshawa, Ontario, as part of a 10-million at-cost mask order from the government of Canada. This is the story of the company’s nimble pivot – in just three weeks – from making cars and trucks to producing 50,000 masks a day to help protect against the spread of Covid-19. 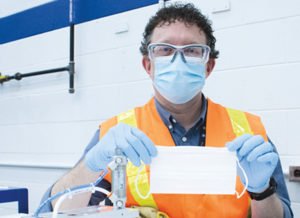 Ian Soutter is normally responsible for EV charging and infrastructure at GM Canada, but now he is better known as the lead on the company’s remarkable transformation to a major manufacturer of medical masks to help in the fight against the Covid-19 pandemic.

“It was a foregone conclusion that we needed to do something to help [the pandemic efforts],” he says. So it was just a matter of deciding where the company could “add the greatest value”. GM’s research showed that the flat mask, sometimes called a surgical mask, was going to be the greatest need in Canada.

With the knowledge that GM in the U.S. had also embarked on a mask manufacturing enterprise, the Canadian team decided to follow their lead and opted to locate in the Oshawa plant where there was an equipped clean room not being used. “We had the opportunity to satisfy a national need, we had an opportunity to take advantage of work that our counterparts had gotten a slight jump on us with, and we had the real estate and location in Oshawa that made it a pretty darn good choice,” Soutter says.

Pedal to the metal 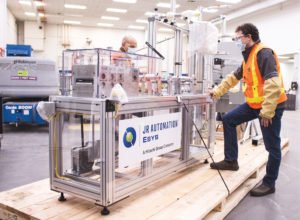 GM Canada received its Medical Device Establishment Licence on April 22, and it was two days later that GM Canada was announced as a mask-manufacturing site. By April 30, the required machinery had arrived from supplier Esys Automation in Michigan.

It was installed in the clean room facility, which, in a lovely historical twist had been the plant’s Coordinate Measuring Machine (CMM) room, and now dubbed the Canadian Mask Making (CMM) room. It’s about 6,000 square feet, and needed an HVAC upgrade, new wiring service, paint and some LED lighting to prepare it for the new operation.

Sixty workers, represented by Unifor, were recalled to work on the mask line. By May 7, a team from GM’s Warren, Michigan, plant was on-site to train the Canadian staff on the mask-making equipment. 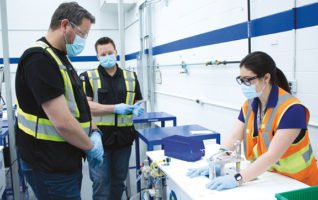 Thanks to the experience in Michigan, the Canadian team was able to build standardized work for its team on the line. A U.S. trainer had developed best practices that resulted in “phenomenal rates of throughput at very high quality levels,” Soutter says. “So we were able to learn from that person to lever all of the key success factors to be able to produce a great mask fast. People were able to pick those practices up pretty readily and it’s really interesting to watch. The first time you do it, and I’ve tried it, it’s a little bit of an awkward exercise, but it becomes a bit of an art thing to watch these folks when they get up to speed.”

Automation for the nation 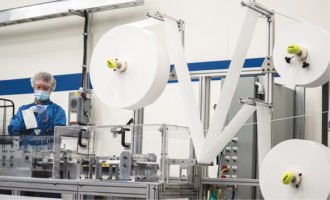 The mask line begins with an automated material joining system that takes three layers of mask material and binds them together using a rotary anvil and ultrasonic welding process. It also inserts the metal nosepiece. It cranks out just under three masks every second.

At this point the mask is just a folded, triple-layered rectangle of the media. After a quality inspection it moves on to one of 16 human operators who use manually operated ultrasonic machines to weld the elastic earpieces into the mask.

Once the masks pass another quality inspection they are sanitized using an ozone deluge, then packaged into bundles of 10 in sealed sanitary bags and assembled for shipping to Health Canada. GM is using its existing logistics partners to ship the masks, which initially have been directed to a distribution centre in the Toronto area, making for a very short trip.

At the end of June the mask unit was manufacturing 25,000 masks a shift or 50,000 masks a day, with an obligation to the Public Health Agency to get them at least a million masks a month over the life of the 10-million-mask commitment. Whether GM will continue to produce masks once the contract is complete is up in the air, Soutter says. “I don’t know that this is something we’ll do in the long haul, but I don’t know it isn’t something we’ll do in the long haul if the health agency has a need and we’re able to fulfill that need, I’m sure we’ll be talking.”

Pivoting on a pivot

Soutter directs a lot of the credit to the company’s supply chain organization. “The supply chain people are the unsung heroes behind all of this,” he says, because of the commitment they made to find alternative sources of supply that wouldn’t make supply issues worse in other areas of the world.

The team went through the entire list of automotive suppliers and found a handful that had capability to produce the types of materials that masks required. These companies were all making automotive components. Thanks to all these companies pivoting operations, Soutter says, “our supply chain community managed to find within our network of automotive suppliers, upwards of a million masks a month worth of new raw material that didn’t exist in the supply chain before we started.”

Busting down the barriers

The timeline from the decision to make masks to the initial shipment of product was just around three and a half weeks, Soutter says. “I’ve done lots of crazy projects in my career and I felt that the last big one that I’d done – when we converted one of our car-making facilities into a truck-making facility in six months – was the scariest project I’ve ever seen. But nope. Mask making took the cake.”

Soutter credits the success of the project to the complete commitment to the project across the entire enterprise. “This has certainly been a testament to what organizations are capable of doing when we’re all united around a cause. And in this particular case, we’re not worried about anything other than we have a national need, we have a country in a healthcare crisis, and this is something that needs to happen. So all of the things that you may historically have found yourself worrying about, you don’t worry about.”

And in spite of the lack of bureaucracy, he says, compromises were not needed and corners were not cut.

“We just had a pool of great people that busted everything in front of them down, and made the impossible happen. This is really a story about how a whole network, a whole team of participants all pivoted towards a cause. It was absolute team sport, there was no singular hero, it was a network of heroes here,” he says.