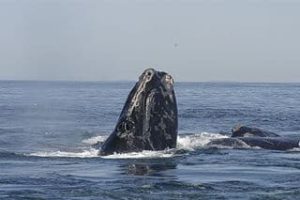 Eight North Atlantic Right whales have been killed since June in the Gulf of St. Lawrence. (Photo: Moira Brown and New England Aquarium)

HALIFAX – The shipping industry is under increased scrutiny after two cargo ships were fined for sailing too fast through the Gulf of St. Lawrence, where the rising death toll among endangered North Atlantic right whales has been partly blamed on collisions with vessels.

There have been eight deaths reported since early June, and examinations of five of the carcasses showed three of them had injuries consistent with ship strikes – a leading cause of death for these rare mammals.

“While the shipping industry has been overwhelmingly compliant in respecting these (speed limits), there are still some exceptions, and Transport Canada is examining all reported cases of non-compliance,” the department said in a statement Friday.

Sonia Simard, a spokeswoman for the Shipping Federation of Canada, stressed the industry’s level of compliance has been impressive, given the number of vessels that move through the gulf.

“It is our understanding that the compliance rate is over 98 percent for 2019 and was equally high in 2018,” Simard, the federation’s director of legislative and environmental affairs, said in an email.

Of the more than 2,200 large vessels that transited the gulf’s shipping corridors between April 28 and July 25, the Canadian Coast Guard found 227 vessels had exceeded the reduced 10-knot speed limit – but after investigation three quarters of these cases were closed without fines.

Simard said many of the vessels flagged by an automated tracking system had exceeded the limit by only 0.5 knots or less.

However, another 48 cases are under review.

“We know how important it is,” Simard said in an interview. “We are dedicated to the best management measures.”

Chad Allen, the federation’s director of marine operations, said it’s important to understand how difficult it is for the crews of large ships to spot whales.

Typically, larger commercial vessels have an officer of the watch and a lookout posted on the bridge. Though they usually enjoy a commanding view of the seas, it can be easy to miss right whales when they break the surface.

“The right whale doesn’t present a big profile,” he said. “It doesn’t have a big dorsal fin.”

As well, when the whales surface to breath, the spray from their blowholes is often indistinguishable from breaking waves when the winds exceed 15 kilometres an hour – a common occurrence on the gulf.

“As the wind picks up, when they do spray, that spray gets dissipated very quickly,” said Allen.

The federation represents 70 shipping businesses in Canada, which include ship owners, operators and marine agents.

Boris Worm, a biology professor and well-known whale expert at Dalhousie University in Halifax, said marine mammal experts are aware of the challenges faced by the shipping industry.

“Even in good conditions, when it’s easier to see the whales, it’s hard to judge which way the whale is moving,” he said. “It becomes hard to guess which way to turn.”

David Browne, director of conservation with the Canadian Wildlife Federation, said it may be time to start talking about moving the shipping lanes in the Gulf of St. Lawrence.

“It’s a massive undertaking,” he said. “You have to convince all of the countries of the world.”

That’s exactly what happened in late 2002, when the International Maritime Organization approved Ottawa’s plan to shift routes in the Bay of Fundy to reduce collisions with right whales. The altered lanes force ships to divert several kilometres around zones where right whales are known to gather.

“Unfortunately, the whales also moved and mostly left the Bay of Fundy and started moving into the gulf,” Browne said.

On Friday, Transport Canada said it had issued $7,800 speeding fines to two cargo vessels: the Americaborg, a Dutch container ship, and the Atlantic Spirit, a bulk carrier registered in Hong Kong.

Allen said even if a whale is spotted before a collision, avoiding the slow-moving animals can be tough.

“A ship is similar to a car on ice – once you start the turn, it may not take immediately,” he said.

Worm said other whales, including fin and blue whales, are fast enough to avoid most ships – but right whales are bulky and slow, which is why whalers decided long ago they were the “right” whales to kill.

And even though they have good long-range hearing, the excessive engine noise in shipping lanes can leave them confused.

“Imagine yourself standing on a highway with your eyes closed and you’re trying to cross the highway – you’ll get more nervous as you hear more noise,” Worm said. “This is the situation the whales face.”

Though commercial vessels are typically equipped with radar for navigation, that technology is designed to detect metal objects with sharp angles, not the rounded, blubbery bodies of right whales.

Sonar uses underwater sound waves instead of radio waves to detect objects, but there are concerns this technology could have an impact on the whales’ communication and navigation.

“It’s not just an issue of cost,” said Simard. “It’s a mix of research and development … in the context of the biology of the whales.”