Ron Foxcroft’s success is no fluke 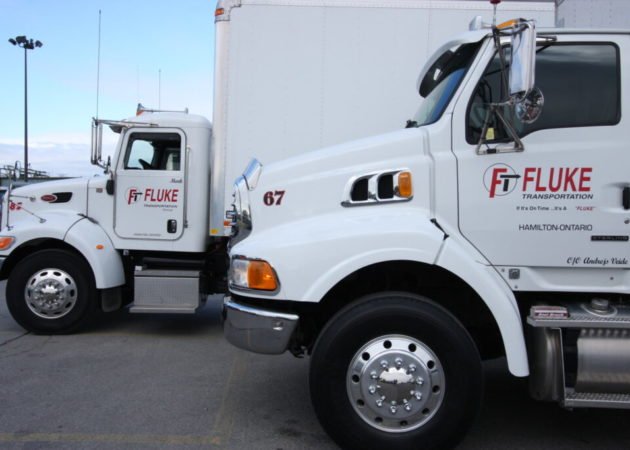 HAMILTON, Ont. – Ron Foxcroft answered the phone at Fluke Transportation on the Friday night of the Canada Day long weekend in 1983.

On the other end of the line was an intern from consumer products giant Procter and Gamble. He wanted 25 trailers and six tractors by Tuesday morning.

At the time, Foxcroft was still learning the trucking business as he had acquired the small fleet just a few months back.

“He didn’t know I just bought the company, and I was three months behind on my car payment,” Foxcroft giggled as he recalled clinching his first major business deal.

In a wide-ranging interview with Today’s Trucking to mark the company’s 100th anniversary, the president of Fluke said he treated the intern “like God”, and promised to provide the equipment, although he had absolutely no idea where would he get them.

Foxcroft spent the entire weekend searching and renting tractors and trailers, and was able to complete the mission on time.

“The intern called me at eight o’clock Tuesday and said, ‘I am so impressed. Our carrier let us down and you came to the rescue. You need to meet my boss.”

“And we’ve been there ever since,” Foxcroft said.

This year, P&G honoured the company with its Carrier of the Year award.

“We got the announcement a week ago, and my heart is still pounding seven days later with excitement. I’m just so proud.”

That wasn’t the only award the company received in its centenary year.

Coca-Cola, another long-time customer, also named Fluke the Carrier of the Year. Then Fluke received the Platinum Safety Award from Northbridge Insurance for its excellent safety record.

The honors came less than a year after Foxcroft was awarded the Order of Canada in recognition of his various contributions.

Of all honors, he considers that the most significant.

“When they called me, I thought they made a mistake. Actually, my breath was taken away.”

“As an entrepreneur, if you rest on your laurels, you are going to fail.”

Foxcroft is taking these achievements in stride, and remains focused on improving his business, and keeping customers happy.

“As an entrepreneur, if you rest on your laurels, you are going to fail,” he said.

“Winning these awards is like winning the championships. The real success is getting better,” the former Olympic and college basketball referee and NBA observer said.

The company has grown rapidly since the high school dropout acquired the fleet in 1983 from the Fluke family of Hamilton, Ont.

Back then, Fluke had a about dozen trucks, 20 trailers and “a few good customers.”

The company was founded in 1920 by the grandfather of Bob, Joe and Sam Fluke.

When Foxcroft heard that the Flukes were planning to retire, he had a conversation with them about buying the company. His income from refereeing was not enough to finance the purchase. A friend agreed to loan $100,000, and Foxcroft said he was able to return the money in three months.

Bob Fluke also agreed to work at the new company as he wanted “a job for life without all the responsibility”. Foxcroft said Bob Fluke taught him the business. He was with the fleet until his death 12 years ago.

The acquisition, however, did not temper Foxcroft’s enthusiasm for basketball. He said he had to referee to buy groceries, anyway. His wife Marie ran the company in his absence.

“She still works for Fluke to this day, doing accounting and administration work.”

Foxcroft attributed the success of his company to a strategic decision he made at the very start: avoid longhaul trucking.

“So, we are predominantly a zero-to-300-mile carrier. And our drivers, 99% of the time, are home in their own bed every night. That really helps with recruiting.”

Foxcroft said the company is dedicating itself to getting better in Fluke’s second century, and that he sees big opportunities in the exploding e-commerce sector.

As the long-serving chairman of John C. Munro Hamilton International Airport’s board of directors, Foxcroft played a role in attracting the online retail behemoth Amazon to Hamilton where it is set to open a fulfillment center next year. Meanwhile, German logistics company DHL is investing $100 million to upgrade its facility at the airport.

“That opportunities might be in trucking, might be in warehousing. We are not too sure right now, but we know we better be on the cutting edge of e-commerce in 2021 to increase our sales and profit.”

Foxcroft, 74, is still involved in the day-to-day activities of his company.

The fleet’s slogan, “If it’s on time… it’s a Fluke” has been widely recognized as one of the best in the trucking industry.

“Never goes a day without somebody saying, ‘Are you the guys that have that famous slogan?’” Foxcroft said.

He said Fluke’s original owners came up with the slogan, but they used it sparingly, putting it on just a couple of trailers.

Soon after taking over the company, Foxcroft said he personally called all the new customers and asked for their opinion about the slogan.

“So, I put it on every single trailer and trademarked it. Now it is a protected trademark.”

Foxcroft is better known as the inventor of the user-friendly Fox 40 pealess whistle. It was introduced to the sporting world in 1987 when he was 40 years old.

Today, the Fox 40 is the whistle of choice of every sports league on the planet.

It is made by Fox 40 International, which employs some 50 people at its two sites, in Hamilton and Mississauga, Ont. The company ships 15,000 units every day.

“We are in 140 countries. If you turn on the television set on any sports league in the world, they are using a Fox 40,” Foxcroft said.

All Fox 40 whistles are made in Canada, he said.

The company also introduced an electronic version about 10 years ago. Demand for it skyrocketed as Covid-19 began to spread globally.

Still, Fox thinks it is unlikely that the push-button whistle will overtake the traditional whistle.

“I’ll tell you why. Referees, sporting people, lifeguards, search and rescue people, the military are all creatures of habit. Everybody has a habit of being comfortable with their traditional whistle.”