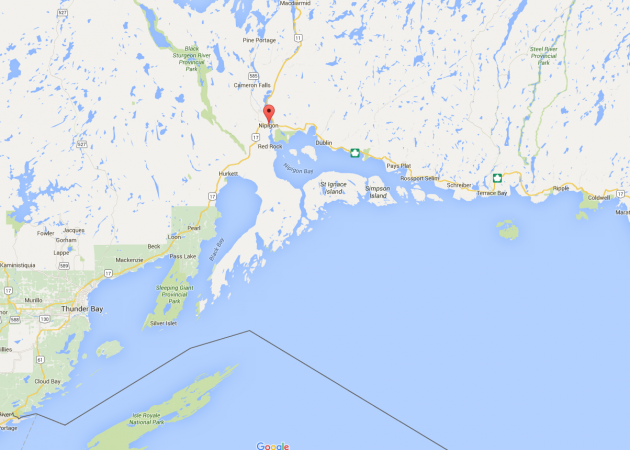 The Nipigon Bridge is about 100 km east of Thunder Bay on the north shore of Lake Superior. (Google Maps)

The newly constructed Nipigon River Bridge on Highway 11/17 in northern Ontario is closed for “an indefinite time due to mechanical issues,” according to the Ontario Provincial Police.

Several media reports suggest the bridge—located 100 kilometres northeast of Thunder Bay—has split apart due  to an expansion joint that failed in the cold weather, raising the bridge deck upward.

The estimated duration of the closure is uncertain at this point with police and local reports noting it could be “possibly days.”

Reports indicate transport trucks have been backing up for several hours. Nipigon and Thunder Bay officials are reportedly opening up community centres to give stranded travellers a place to stay.

At this point, the only way for vehicles to pass between Ontario and Manitoba and get around Lake Superior is to detour through the the United States, provided they have the necessary cross-border documents. Westbound traffic from Thunder Bay would have to travel south to the Pigeon River Border crossing and then from Duluth to Sault Ste Marie.

In the meantime, the Ontario Ministry of Transportation provides provincial traffic information through its website at ontario.ca/511, twitter @511Ontario or by calling 511.

The Nipigon River Bridge opened in late November, when the westbound portion of the structure opened to two-way traffic. Work on the eastbound lanes continues, and is slated for completion in 2017.