Mobile Industrial Robots (MiR)has launched the MiR250 Hook for automatically collecting and towing carts. The MiR250 Hook includes the MiR250, MiR’s fastest and most compact AMR, creating robot that easily and cost-effectively automates the transport of various sizes of loaded carts weighing up to 1100 pounds (500 kg). 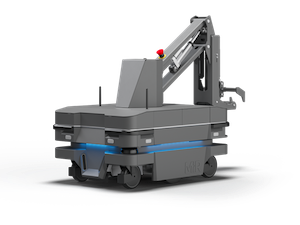 The robot autonomously connects to carts and tows them where they need to go.

The MiR250 Hook robot identifies carts by April Tags and autonomously transports them. MiR250 Hook can be incorporated into a fleet of MiR robots, and can be easily redeployed to meet changing requirements. Updating the robot’s mission at any time is simple, using a smartphone, tablet or computer and standard Wi-Fi or Bluetooth communications to access the robot’s intuitive controls.

“With the highly precise and powerful MiR250 Hook, towing carts and transport cages through dynamic and potentially constricted environments is now easier, more manageable and quite economical. There is no need to modify the layout of the facility or purchase new carts, since the MiR250 Hook can autonomously locate and attach to almost any type of cart via QR codes or AprilTags and deliver it to its destination without human involvement.”

The MiR250 Hook safely and efficiently travels at speeds up to 4.5 miles per hour (2 meters/second).

In addition to the integrated MiR250 Hook robot solution, companies that already own MiR250 robots can separately purchase the MiRHook 250 top module for cart towing, without the need to invest in new carts.

Only a few steps are required before deploying the MiR250 Hook in a workplace. These include attaching QR codes or AprilTags to carts and cages so the MiR250 Hook can identify them; mapping the robot to its route manually the first time or importing a map of the building and premises into the robot’s software, and installing the automatic charging station that lets MiR robots autonomously reload their batteries as needed (if this is the first AMR deployed in the facility).