by Inside Logistics Online Staff April 22, 2019 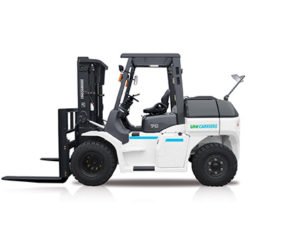 The PD6 next-generation Platinum Series replaces the outgoing G06 Series and is UCA’s most heavy-duty pneumatic tire lift truck with a 13,000 to 22,000-pound capacity range.

The new series adds three models to the lineup, including 6T low-power and high-power offerings and a 7T low-power model. Under the hood is a Kubota v3800 Tier 4/CARB compliant diesel engine with improved fuel consumption.

In addition, the PD6 Series has a seat-actuated operator presence system with seatbelt and parking brake warnings and a five-piece overhead guard that cuts replacement time by 75 per cent.