Thirteen photovoltaic power stations have been installed on the roofs of the Vienna branch generating around 2.4 million kilowatt hours of electricity every year 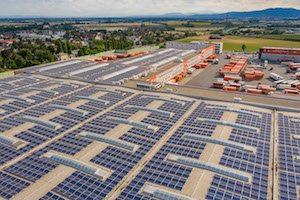 Around 2.4 million kilowatt hours of electricity every year are generated over an area of approximately 21,500 square meters. (Source: Ursprunger / Media Solutions)

MARIA LANZENDORF, Austria – Gebrüder Weiss has leased the roofs of its transshipment and logistics warehouses in Maria Lanzendorf near Vienna to a solar energy company.

Around 2.4 million kilowatt hours of electricity per year are being generated there using a surface area of 21,500 square meters with 13 photovoltaic power stations. This is equivalent to the average annual consumption of around 1,300 three-person households in Austria.

“Sustainability is one of the core values at Gebrüder Weiss. This is why the decision to lease the flat roofs for this purpose was made not only on economic grounds, but also on environmental ones. Their size makes them ideal for photovoltaic systems,” explains Karl Meiringer, branch manager in Maria Lanzendorf.

In all over three million kilowatt hours of electricity are produced each year from solar energy alone throughout the group.

With more than 7,100 employees, 150 company-owned locations and an annual turnover of 1.67 billion euros (2018), Gebrüder Weiss ranks among Europe’s leading transport and logistics companies.