January 14, 2021
by Inside Logistics Online Staff

January 14, 2021
by Inside Logistics Online Staff 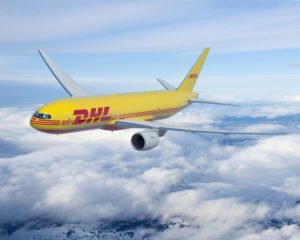 Atlas Air and DHL Express have announced major purchases from Boeing this week.

Atlas will operate these new aircraft for customers or dry-lease them through its Titan Aviation Leasing subsidiary.

Queen of the Skies

It already operates the world’s largest fleet of Boeing 747 freighters, with a total of 53 in its fleets.

The 747-8F provides 20 percent higher payload capacity and 16 percent lower fuel consumption than the 747-400F, and has 25 percent higher capacity than the new-technology 777-200LRF. It is also the only factory-built freighter with nose-loading capability in production, which will serve the long-term needs of the airfreight market.

The new 747-8F order will also help Atlas manage its capacity, as a number of its legacy 747-400F aircraft leases will be up for renewal over the next several years. 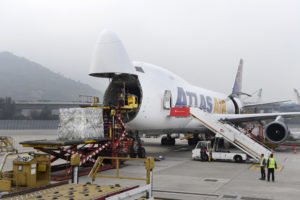 The B747-8F is the only factory-built freighter with nose-loading capbilities.

These four 747-8Fs are the last that Boeing will produce.

“The 747-8F is the best and most versatile widebody freighter in the market, and we are excited to bolster our fleet with the acquisition of these four aircraft,” said John W. Dietrich, Atlas Air Worldwide president and CEO.

“The 747 will forever hold a special place in aviation history and we are honored by Atlas Air’s longstanding commitment to the airplane. Atlas Air began operations 28 years ago with a single 747 and it is fitting that they should receive the last 747 production airplanes, ensuring that the ‘Queen of the Skies’ plays a significant role in the global air cargo market for decades to come,” said Stan Deal, president and CEO of Boeing Commercial Airplanes.

“With the global air cargo fleet expected to grow by more than 60 percent over the next 20 years, we look forward to delivering these airplanes and supporting Atlas Air’s Boeing fleet well into the future.”

For its part, DHL says buying the new planes is evidence of its belief that e-commerce is here to stay.

“Fueled by globalization, digitization and the unprecedented demand of our customers during the recent peak season, our global e-commerce volume grew by more than 40 percent in Q4. With the order of eight new wide-body freighter
aircraft, we underline our conviction that e-commerce is an enduring megatrend. This is why we decided to act early and kick-off 2021 with this investment in our future,” said DHL Express CEO John Pearson.

By allowing DHL Express to make fewer stops and reduce associated landing fees on long-haul routes, it offers the lowest trip cost of any large freighter.

Preceding the new order announced today, DHL Express had already taken delivery of 10 new B777F aircraft as part of an original order of 14 aircraft made in 2018. These deliveries helped DHL manage unprecedented demand during the peak shipping season last year.

Boeing’s 2020 World Air Cargo Forecast anticipates significant increase in demand for new and converted freighters with a fleet growth of more than 60 percent over the next 20 years. This reflects in the growing demand for cross border time definite shipments DHL Express is experiencing. For this reasons both companies also agreed