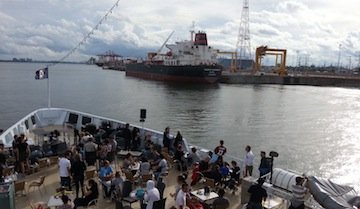 Montrealers enjoying a free cruise in the port

MONTREAL, Quebec—On Saturday, September 6, more than 2,000 Montrealers were able to discover port facilities by making the most of a cruise offered by the Port of Montreal aboard the Cavalier Maxim, owned by Croisières AML, its partner for Port in the City Day.

Port in the City Day enjoyed the same success as in past years, with the free cruise tickets gone within hours. Five departures took place throughout the day, for a one-hour cruise from King Edward Pier in the Old Port to the east end of the city. Cruise passengers had the opportunity to discover port infrastructures spread over 26 km along the south shore of the Island of Montreal. Senior managers from the Port served as the tour guides.

“This very popular event with Montrealers shows the Port of Montreal’s importance at the heart of its community and reflects our commitment to fully assume our role as an active and responsible corporate citizen,” stated Sylvie Vachon, President and CEO of the Montreal Port Authority.

This year, to further enhance its good neighbourliness, the Port of Montreal launched a special invitation to port neighbours, namely the citizens of the boroughs of Ville-Marie, Mercier—Hochelaga-Maisonneuve and Rivière-des-Prairies—Pointe-aux-Trembles, and the city of Montreal East, who reside close to port territory. They accepted the invitation in great numbers.

All those who could not get tickets will have another chance next year. In light of the huge popularity of this year’s Port in the City Day, the Port of Montreal definitely plans to repeat this event.

Operated by the Montreal Port Authority (MPA), the Port of Montreal is a major diversified transshipment centre that handles all types of goods – containerized and non- containerized cargo, liquid bulk and dry bulk. It is a leading container port served by the largest container shipping lines in the world.

The Port of Montreal has its own rail network directly dockside. It is connected to the two national rail networks and a highway system. The port operates a passenger terminal that welcomed 69,966 passengers and crew members in 2013. All other terminals are run by private stevedoring firms.