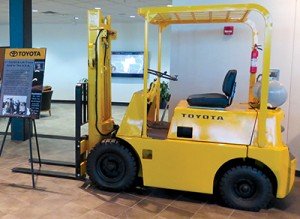 The first forklift built at the plant sits proudly in the lobby. 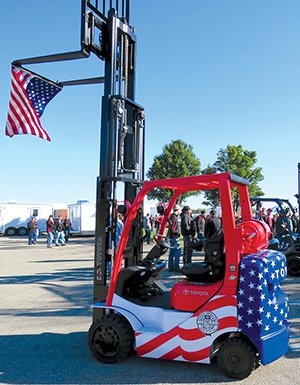 To commemorate the event, the 500,000th fork lift to roll off the assembly line was specially decorated and on display at the anniversary celebration.

It was a proud day at the 25th anniversary celebrations of Toyota Industrial Equipment Manufacturing, Inc (TIEM) as the company celebrated a quarter century of building forktrucks in the United States.

Operations at the plant in Columbus, Indiana were shut down for the afternoon and staff given half a day off so the 1,500 assembly line staff could gather with senior executives and dignitaries to recognize the achievement.

In 1990, TIEM became the first Toyota lift truck manufacturing plant outside of Japan. Since the first one rolled off the line more than 20 years ago, TIEM associates have built more than 500,000 fork trucks, and Toyota has steadily penetrated the US market to achieve and maintain the rank of the number one lift truck brand since 2002.

Now most Toyota lift trucks sold in North America are produced at TIEM. The facility has the capability to manufacture a wide range of industrial equipment used in a variety of indoor and outdoor environments including: three-wheel and four-wheel electric lift trucks, internal combustion cushion tire and pneumatic tire lift trucks, diesel tow tractors and DC/AC inverter assemblies for the Toyota Tacoma. 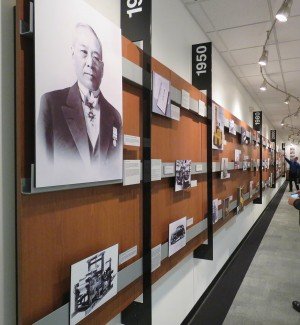 The history of Toyota’s manufacturing operations is illustrated in the HQ building.

“Toyota’s 25th anniversary manufacturing forklifts in the US couldn’t have happened without our suppliers, customers, dealers and all of the Toyota associates who have helped along the way,” said Brett Wood, president and CEO of Toyota Material Handling North America. “We are proud to call Columbus, Indiana, the home of Toyota Forklifts.”

The event highlighted the company’s investment in the community, with multi-million dollar plans to expand the TIEM campus. Toyota recently announced a new $16 million dollar expansion and building renovation. The 50,600-square-foot addition will increase the total facility to 1.1 million square feet of manufacturing and support space.

The new building and renovation will provide room to support staff development, new manufacturing technology development, and new product development, along with the company’s Vision 2020 strategic initiatives. The expansion includes a two-story office building, a new cafeteria, a new storm shelter and locker room and expansion space for Toyota’s on-site medical centre for associates and their families.

At the event Toyota also announced its partnership with the Columbus Express Soccer Club to sponsor a new local indoor soccer facility that will be named the Toyota Industrial Equipment Soccer Pavilion. 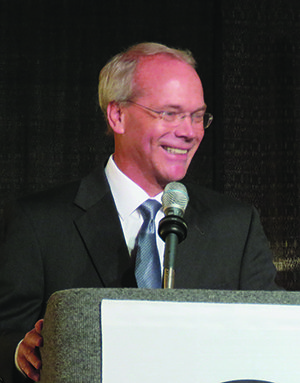 Journalists who attended the event were given a tour of the plant before it shut down for the day, witnessing the Toyota Production Method in action on three assembly lines.
It’s highly choreographed complexity; forktrucks come off the line with astonishing speed. One line produces a truck in under 25 minutes, and 140 are produced in a shift. Different models are interspersed in the line to maintain a smooth flow, with easier builds arriving at workers’ stations between the more complex ones.

Toyota also took the opportunity to show off some of the seven new models it’s introduced over the past 18 months. These include an AC stand-up rider, three-wheel electric forklift, walkie pallet jacks and two walkie stackers, a new reach truck, an 80-volt electric forklift and a high-capacity IC forklift.

According to Cesar Jimenez, director of product planning, technical services and warranty for Toyota Material Handling, USA, Inc (TMHU), 65 percent of trucks sold in the past year have been electric. There’s been a “dramatic shift in the past year” towards AC trucks, he said.