In Europe, where 70 percent of cargo still moves by road, an innovative startup is trying to change that by offering a way to move truck trailers by rail.

CargoBeamer, based outside of Leipzig, Germany, provides a completely automated system and specialized rail cars that load road trailers onto the rails.

The trailers are driven right through a carrier—they call it a pallet—and secured there. The carrier sits atop two beams (hence the name CargoBeamer) that then slide it sideways onto the unique rail carriage. It locks automatically into place with side panels. 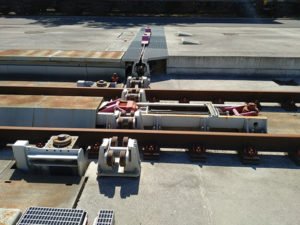 The mechanism is built right into the floor of the terminal. (Emily Atkins photo)

While it requires built infrastructure—the beam system is built into the rail terminal’s floor—the loaded CargoBeamer pallet is also designed to be lifted by a normal container crane, making it fully functional at any intermodal facility.

At present the company has about 70 of the pallets and cars in use on a route in Europe that runs from Venlo in the Netherlands, through to Cologne, Germany and ending in Domodossola, Italy, near Milan. They run two trains a day over this transalpine route.
The company does not yet have the dedicated beam loading systems in place, although the company is working with Deutsche Bahn to build the terminals.

CargoBeamer trialled the system for three years with Volkswagen at the car naunfacturer’s Wolfsburg plant, setting up a three-module terminal.

CargoBeamer CEO Hans-Jurgen Weidemann demonstrated the system at the company’s test yard during the recent International Transport Forum event in Leipzig, Germany. With a single mouse click on an off-the-shelf ruggedized laptop, the system whirrs into motion, sliding the laden pallet into the rail car, and locking it down. Another couple clicks and the process reverses, delivering the trailer and pallet back to the ground where a shunt truck can quickly back in and pick it up.

The only manual processes require the driver to complete the hookup in the usual way.

Weidemann explained that with CargoBeamer a train can be fully loaded or unloaded in 15 minutes, while a conventional European container train can take up to five hours. As well, a CargoBeamer terminal requires a much smaller footprint, using a quarter of the space of a regular terminal.

Weidemann noted that his company is competing not against conventional intermodal traffic, but against trucking carriers. “We are addressing a huge market,” he said, referring to the 94 percent of truck traffic in Europe that is compatible with his service. CargoBeamer can handle any road-going trailer, up to 37 tonnes—from reefers, tank trailers and silo trailers to sliding floor trailers—while only six percent of the trailers on European roads are compatible with container cranes.

The problem of traffic congestion is just getting worse on European roads. In 2016 there were almost 700,000 traffic jams in Germany alone, which added up to 420,000 wasted hours for those stuck in gridlock. The estimated cost of traffic tie-ups in 2015 was 25 billion Euros in 2015.

The German government estimates that over-the-road freight will increase 30 percent by 2030, but road capacity is only planned for four percent growth in that same time period.

In light of these challenges for road transport, Weidemann pointed out the benefits of moving cargo by rail. In addition to increasing the speed of service, rail has lower C02 output per tonne-kilometre, diverting cargo to the rails would help alleviate highway congestion and would provide a less expensive way to move freight.

He asserted that a more efficiently organized European rail freight system would be able to handle 200 billion more tonne-kilometres than it does now.

Double-stack containers that are commonplace in North America cannot be used in Europe due to the different gauge and many tunnels, but automated loading will add efficiencies to make rail more competitive, he sserts. Future plans include building a high-volume container with a 48-tonne capacity that would serve the route between Europe and China.

Weidemann noted that 80 percent of the cost of rail transport in Europe is accessing the network, while his service competes on the remaining 20 percent. “Automation is where the savings are,” he concluded.