Converting a green ethos into a green DC 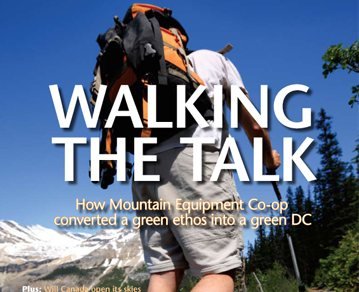 Canadian outfitter Mountain Equipment Co-op’s entire business is devoted to outdoor exploration. Its members value pristine waters, clean trails and unpolluted air. It should come as no surprise that its new distribution centre is a model of environmental sustainability. But it also happens to be propelling business into a very promising future.

Rare indigenous wildflowers surround the new Mountain Equipment Co-op (MEC) distribution centre in Surrey, British Columbia. Rabbits and birds have been known to frequent the greenery, which is framed by a band of trees that may one day become a nature trail. People show up regularly to take photos of the scenery.

Sure, it fits the granola stereotype associated with the co-op, but behind that bucolic exterior is a state-of-the-art DC that would turn the head of any shrewd logistician.

Like many operations dealing with unprecedented business growth, MEC needed a new DC to expand its distribution capabilities. It had to do so on time, on budget and with minimal disruption to the business—the usual requirements.

So MEC created a plan to meet all those targets. But it added a new summit to the climb by deciding to do so with a facility that would exemplify environmental sustainability inside the dock doors and beyond. No rhetoric, no “greenwashing”, just an operation that would support both its business goals and its eco-friendly philosophy.

And the co-op did it. This is the story of how to activate a green supply chain that makes good business sense.

Lost in the woods
MEC’s British Columbia distribution base is responsible for stocking the co-op’s 11 (soon to be 12) retail stores across the country and for fulfilling online and catalogue orders from around the world. The merchandise spans the outdoor gear gamut from climbing carabiners and rain jackets to tents and canoes.

Up until last year, these distribution operations were scattered across three storage facilities in nearby Richmond. Two were MEC-run; a third-party logistics provider operated the third. One of the MEC-run sites served as the main DC, while the other two were used to draw replenishment stock and store overflow. Together, the buildings provided about 130,000sqf of storage space.

It was a complicated arrangement, and by 2004 it was compounded by a change in the sourcing model. A new buying and design manager named David Labistour—now MEC’s CEO—started introducing non-MEC-branded product lines to the product roster. Much of this was sourced from Asia. Gone were the days when most merchandise could be replenished in small batches; in order to get factory time overseas, purchase orders had to be much larger.