December 13, 2017
by Inside Logistics Online Staff

December 13, 2017
by Inside Logistics Online Staff 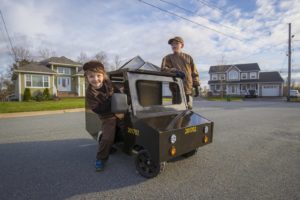 MISSISSAUGA, Ontario — UPS Canada launched its annual Wishes Delivered campaign, a global initiative spreading goodwill and inspiration by delivering a few special wishes to individuals in the communities served. Every delivery begins with a wish.

This year, UPS and the Children’s Wish Foundation of Canada, a charity granting wishes to children diagnosed with life threatening illnesses, are making the holidays special for Jax and Cooper. Click here to watch Jax and Cooper’s Wishes Delivered story unfold.

For several years, 12-year-old Jax raised money for the Children’s Wish Foundation of Canada, not knowing that one day he would receive a wish himself. Having had his wish granted, he wanted to pay it forward.

This year, he learned five-year-old Cooper’s wish was to have a swimming pool. To help Jax and Cooper, UPS will pay for the pool and Children’s Wish Foundation of Canada will help install it next spring. To convey the news to Cooper, Jax became a UPS driver for the day, filled a UPS delivery truck with pool toys and delivered them to Cooper, giving the young boy something to look forward to through the winter.

“For Children’s Wish it’s about the anticipation of the wish,” says Cheryl Matthews, regional director, Atlantic Region, Children’s Wish Foundation. “It’s what gets those kids through the needles and the hospital visits.”

Cooper also received a mini UPS delivery truck. “It was an overwhelming moment for everyone involved, watching Jax deliver the wish to Cooper and watching the boys interact,” says Will Johnston, business manager, East Atlantic, UPS Canada. “Wishes Delivered gives us the opportunity to come together as a community and experience the real magic of the holidays.

“Wishes Delivered is an annual campaign designed to make wishes come true and benefit charities. This year marks the third Wishes Delivered campaign for UPS Canada and the second ‘Driver for a day’ video.