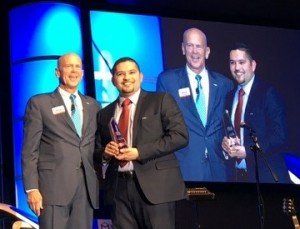 Luis Castaneda, key account manager for the Oregon market at Raymond Handling Concepts Corporation (RHCC), a materials handling equipment supplier in Northern California, Nevada and the Pacific Northwest, was announced as the 2016 Face of the Supply Chain and the winner of MHI’s #iWorkInTheSupplyChain contest during the MODEX 2016 Industry Night on April 6, 2016. Castaneda was born in Mexico and moved to Yakima, WA when he was seven years old. He began his career managing a local auto parts centre in Yakima, Washington, where he made such an impression while helping a tech who worked for Raymond Handling Concepts Corporation that he was invited to apply as soon as a position became available. He started with Raymond Handling Concepts Corporation in Eastern Washington as a parts sales representative in January 2010 and moved into an account manager position in 2012. Right away, he became thoroughly involved in the supply chain and enjoys every aspect of it.

Chris Tullis has joined executive search and talent acquisition firm TSI Group as director of client development. Tullis will lead the industrial, manufacturing, sales, and business to business practice. Tullis has over 15 years of sales and executive search experience, most recently as managing partner of a boutique recruitment firm where he focused on a wide range of industries including distribution, industrial, manufacturing, business to business, medical device and consumer packaged goods. He will be based out of the Toronto office. 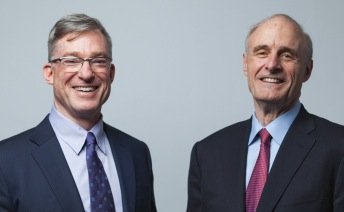 Rockwell Automation‘s board of directors has elected Blake Moret, a 30-year veteran of the company, as president and CEO, effective July 1, 2016. At that time Keith Nosbusch, who has been president and CEO since 2004, will leave those roles while continuing as chairman of the board. Moret is currently senior vice president of the company’s Control Products & Solutions segment. Moret has 30 years of experience in sales and business management roles in product, services, and solutions businesses across Rockwell Automation. He began his career in 1985 as a sales trainee, and subsequently served in senior positions across the organization, including international assignments in Europe and Canada. In 2011, he was named senior vice-president of Control Products & Solutions. He is a graduate of Georgia Institute of Technology, where he earned a bachelor’s degree in mechanical engineering. He has served as Chair of the Board of the Manufacturing Institute of the National Association of Manufacturers.