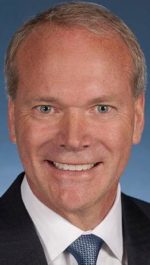 Brett Wood, president and CEO of Toyota Material Handling North America (TMHNA), has been made a senior executive officer of TMHNA’s parent company, Toyota Industries Corporation (TICO). Wood becomes the only non-Japanese TICO executive and the 12th highest-ranking executive in the global company. A 31-year Toyota veteran, Wood will maintain his current responsibilities. At TMHNA  Wood oversees Toyota Material Handling (TMH) in Columbus, Indiana, and The Raymond Corporation in Greene, New York. He has served as president of Material Handling Industry (MHI), and is the current chairman. Wood previously served as the chairman of the board of directors and engineering committee chairman for the Industrial Truck Association (ITA), and currently serves on the ITA executive committee. Wood is the first TICO executive to be elected to these industry board positions.

Zubaid Ahmad has joined the Sealed Air Corporation board of directors. The appointment expands the board to 10 directors. Ahmad has more than 35 years of global experience in corporate and investment banking. He is the founder and managing partner at Caravanserai Partners LLC, a merchant banking firm. He also serves as a senior advisor to CPP Investments and Muzinich & Co. Before establishing Caravanserai Partners, Ahmad served as vice-chairman, institutional clients group and co-head of global asset managers group at Citigroup. Ahmad holds an MBA, with distinction, from Harvard Business School.

Berkshire Grey has appointed Neil Berry as senior vice-president and general manager, EMEA. Berry will open an office and headquarters location in Europe. Previously, Berry served as SVP and GM of Intelex. His role in starting and growing large-scale EMEA operations has created significant enterprise valuations in the software and technology industries, for companies including Apropos Technology (IPO), Metastorm (acquired by OpenText), Ooyala (Acquired by Telstra) and Comcast.

Pam Marion has been appointed chief customer officer for Omnitracs, LLC. Before joining Omnitracs, Marion served as chief customer success officer for Domo. Before Domo, she spent 12 years with SAP as chief of staff and senior vice-president of strategic programs and customer experience for SAP SuccessFactors. Earlier in her career, Marion worked for other technology companies, including Kronos and Ultimate Software. She is a graduate of High Point University and holds a Bachelor of Science degree in Business and Economics.