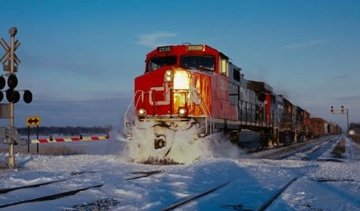 MONTREAL, Quebec—CN is opening its wallet.

The company announced its spending plan for the coming year and in doing so, committed to investing $1.9 billion in upgrading its rail network and improving its customer service delivery.

The largest portion of the budget will be devoted to fixing and maintaining tracks and improving the fluidity of the network. Replacing rails, ties and track materials, working on bridges, and adding capacity will eat up over $1 billion of the CN’s spending budget. Some of the company’s planned projects include:

Not only is the rail company spending money on new tracks, it is also buying equipment to run on those rails. The company has earmarked $200 million for the purchase of locomotives, intermodal equipment and other vehicles. CN is scheduled to take delivery of 77 high-horsepower locomotives during the next two years. Forty of the engines will be brand new while 37 are used. Last year, CN purchased 25 new locomotives and 123 second-hand ones.

CN’s business development efforts are expected to cost $700 million. Some of the new initiatives designed to improve its service offerings are:

According to CN president and CEO Claude Mongeau, “Infrastructure investments, the acquisition of new locomotives and equipment and the enhancement of information technology systems will help support our agenda of operational and service excellence. They will also make our customers more competitive in domestic and global markets and position us to maximize further business opportunities in intermodal, energy and other resource and manufacturing markets in 2013 and beyond.”

In 2012, CN spent just over $1.8 billion on its capital investment program.