Broccolini has applied for permit to build 700,000-square-foot warehouse in North Gower

August 21, 2019
by Inside Logistics Online Staff

August 21, 2019
by Inside Logistics Online Staff

The facility will be located at 1996 Roger Stevens Dr., just west of Highway 416, the main artery connecting Ottawa to Highway 401.

The facility will employ up to 1,700 people, in the village of 2,100 citizens, which is part of the City of Ottawa.

According to documents filed by the developer in July, the building plans specify it will be 30 metres high and 350 metres long with 1,800 parking spots, and will include an office area.

The location is currently used as a cornfield.

Broccolini is currently developing a DC in Ottawa for Amazon, that is slated to open soon. At one million square feet it will be the largest industrial facility ever built in the area, and will employ over 650 people. 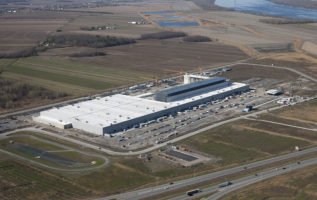 The IKEA DC is slated to open later this year.

The developer is also working on a 1.2 million-square-foot IKEA distribution centre in Beauharnois, Quebec that is slated to be completed in late 2019. It will include a distribution centre divided into a three-compartment warehouse (Buildings 1, 2 and 3) separated by firewalls, and a one-storey office space with employee amenity areas.