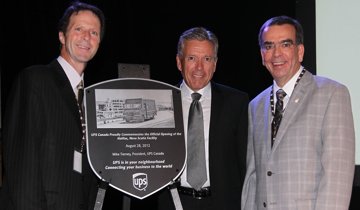 In addition to a facility that began operations in April in Moncton, New Brunswick, UPS plans to offer enhanced pick-up and delivery services in New Brunswick (Saint John and Fredericton), Nova Scotia (Sydney and New Glasgow), Charlottetown, Prince Edward Island, and St John’s, Newfoundland and Labrador, by the end of the year.

UPS has also added extra air capacity to its Atlantic Canada flight schedule, which the company says has created a “significant one-day improvement in time-in-transit for many shipments to and from Atlantic Canada”.

Over 250 new positions were created to staff the Halifax logistics centre.

Along with its eastern Canadian expansion efforts, this year the company has also opened one new facility in Calgary, Alberta and two in Ontario: an expanded hub in Toronto and a healthcare hub in Burlington.