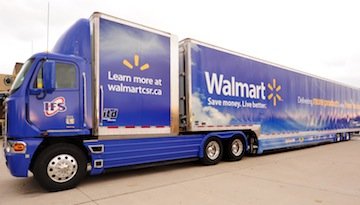 But attention isn’t anything new for Walmart. The project that earned Buna his nomination entered the media spotlight when the retailer introduced its supercube transport trailer to the public.

The supercube is a longer, lower trailer which can carry 30 percent more cargo. It’s mated to a cab-over-engine (COE) tractor with a dromedary (aka drome) box behind it. The drome holds four pallets, (about 10 percent of a trailer load) meaning the combined unit can haul 40 percent more cargo in one trip.

While longer trailers aren’t anything new—LCVs (long combination vehicles) are on the roads in a number of provinces—the combination of the longer trailer, which measures 18.4m (60ft, 6in), and the shorter tractor means the full rig is the same length as a standard tractor-trailer.

“It’s not just a 60ft, 6in trailer,” says Buna. “There’s more to it than just that. We have LED lighting in it. We have low-friction tires. We have an aerodynamic drag system put on it with skirting and cab fairings. The hydraulic system that raises this trailer to bring it up to loading-dock height means we don’t need to have our vendors or our stores modify their loading-dock height to be able to work with this. It’s quite a tricked out set of wheels.”

Mississauga, Ontario-based Innovative Trailer Design (ITD) designed the hydraulic system that raises the trailer to dock height, the sliding drome box—which permits the tractor’s storage unit to move directly against the dock during loading and unloading operations—and the trailer itself. Walmart also worked with Ontario’s Ministry of Transportation (MTO).

The project began in March 2012, when Buna devised the concept. By November 2012, the company had MTO approval to run a pilot project and had the trailers and one truck ready to roll.

When the company unveiled the new trailer and the modified tractor (a 2003 model purchased used, since COE tractors are no longer manufactured in North America), the new design caught the attention of the trucking industry and the worldwide media.

Some of that attention, however, was less than positive. Representatives of the trucking industry in Ontario expressed concerns about how the pilot project was going to operate. Walmart owns the trailers, which it purchased from ITD, but the truck hauling them is owned by one of the company’s transportation partners.

“I guess there was a misunderstanding that Walmart was the one actually handling the trailer. We don’t actually own any tractors. We don’t have our own private fleet in Canada. Everything we do is through a third party. I think it was more of a misunderstanding that Walmart was actually going to be operating this equipment, when a third-party carrier would be operating this equipment and they would be the ones that would be held permitted with the equipment and be reporting into the MTO. If you’re asking me what was the biggest hurdle, that was it: channels of communication.”

The pilot, which allows the supercube to travel between the regional DC in Mississauga and a test store in Belleville, approximately 200km away, is expected to run for one year. “Our goal is to get it put into regulation. And not have it on a permit program.”

Buna’s other goal is to expand the program outside Ontario. Walmart has already entered into discussions with other provinces. In particular, Buna said the company would like to use them at the Calgary, Alberta distribution centre.