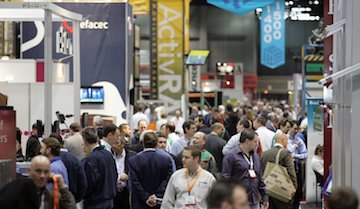 FROM THE JANUARY-FEBRUARY 2013 MM&D PRINT EDITION

Bracing winter winds blew through Chicago, Illinois this January but even they couldn’t cool down the energy and excitement that seemed to resonate out of McCormick Place as it played host to ProMat 2013.

The materials handling tradeshow drew 785 exhibitors and 34,085 attendees, who packed the tradeshow floor. Informal polling by MM&D found exhibitors reporting a seeming uptick of senior level executives—people who could make purchasing decisions and open the purse strings—visiting their booths, and that impression was confirmed by the facts. ProMat officials report 85 percent of attendees had buying authority and 34 percent planned on spending $1 million or more on equipment and systems over the next 18 months.

According to MHI (the new name for the association formerly known as the Material Handling Industry of America) people intend to open their purse strings. MHI forecast a six percent (or better) growth rate across the industry for 2013 and a 10 percent rate for 2014. MHI cautioned there is some risk of a downslide for the first half of 2013, but even so, it expects the global industry to be strong.

The projections follow a series of positive numbers generated in 2012. Orders for new materials handling equipment grew 7.7 percent in 2012, while shipments grew 9.6 percent. For 2013, that number is expected to grow approximately seven percent, with the following year seeing a nine percent growth rate.

Positive feelings about the future weren’t just found in data projections. Organizers added a new element to the show. They hosted a competition and gave awards to the most innovative new and existing products. The winners were iQFusion, a custom-sized cardboard box automated packer, by Packsize LLC (new product) and the dual sided packing slip/shipping label printer application TwinPrint System by FOX IV Technologies Inc (existing product). But more than just passing out some hardware, the competition spurred discussion about the competing products and about advancements in the industry in general.

The show’s headlining speakers echoed enthusiasm for the industry. The Wednesday morning keynote, in particular, featured a panel discussion about the future of the materials handling industry, and the industry experts on the panel all seemed to be genuinely optimistic about the industry’s health.

The discussion was led by futurist Edie Weiner, president of Weiner, Edrich, Brown Inc. But before moderating the discussion, she opened with a presentation about how changing perceptions and technology will allow the industry to leap forward.

She stressed that the concept of storage is going to play an increasingly important role, not just in the materials handling world but in everyday life. “Solving the storage problem will be a tremendous opportunity of the future. People will want to pay for it.”

Developing a better understanding of what goes on outside of the four walls of a business is one way the industry is changing, according to panelist Michael Mikitka, CEO of the Warehousing Education and Research Council (WERC).

“We’re hearing more from our members they’re becoming more involved with sales teams and customer service when it comes to delivering on the promises made by the company to its customers. They’re getting involved to see how the product, once it hits the customer’s door, is being used. Then they can provide input and take back information that provides value to the relationship.”

He added that not only is the industry adapting to this new business approach, but it’s trying to quantify and understand it as well.

“Obviously numbers and benchmarking are important, but we’re moving beyond the numbers to what we refer to as soft metrics. We’re finding some of our members are now trying to evaluate relationships they have with business partners: the flexibility they have, their reliability, etc. Using that, they consider all the other metrics—what’s been delivered on-time, what’s been delivered damage-free, what’s the best supplier who’s been reliable and dependable. The relationship side is a metric our members are looking more closely at.”

Closely examining every aspect of the operation is the necessary first step organizations must take if they want to drive their supply chains into the future. They really need to understand their business as it is today and determine what they want it to be in the future.

“I think our role is so core, the role itself doesn’t change, but how we implement and how we innovate, that makes the supply chain more efficient,” said George Prest, CEO of recently rebranded Material Handling Industry (MHI).

“Our industry literally touches everything. We are just one small part of it, but we tend to look at ways of improving productivity because if we can increase productivity we have a healthier economy, which creates jobs and a higher standard of living. So what I see is more and more innovations. The role itself doesn’t change—move, handle, store, protect—but the way we do it will evolve.”

“In 2009 our members really, really struggled and the sales process changed. The cycle became much longer. There was a realization the skill-sets needed by sales people changed with it. They needed to be much more solutions-focused. I think an organization can take its core beliefs and flip them over, and that’s really where our members need to go and really see how things have changed, ”

Richards said the industry must do a better job recruiting talent. She told the audience of the efforts MHEDA is making to introduce high school and university students to the supply chain world.

“Whether they become our employees or our suppliers, it’s important for them to see who we are. We’re an industry hidden in plain sight. We need to bring in young people to help us and turn things around and uncover new paradigms and flip our core beliefs.

Rick Blasgen, president and CEO of the Council of Supply Chain Management Professionals (CSCMP) also said he regretted the supply chain not having as high a profile among students

“Students coming out of universities are receiving higher paying job offers than engineers, so we’re getting there. The career opportunities for supply chain professionals have never been greater. If you want an international opportunity, it’s easily accomplished. There are networks of people in our organization looking for individuals who want those roles. And those people are becoming senior leaders in companies. Look at Tim Cook. He ran the supply chain before taking over the reins at Apple. Or Walmart’s last two CEOs were out of their logistics organizations because we see so much and understand our suppliers and our customers. Frankly we’re taking over the world and everybody hasn’t figured it out yet.”