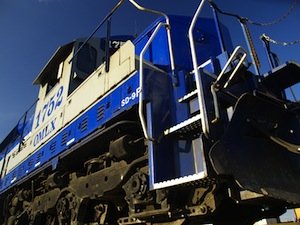 CHURCHILL, Manitoba—A rail line that serves as a vital link to Churchill in northern Manitoba—one being eyed for shipments of crude oil—has been knocked out of commission again due to the boggy terrain it covers.

Service along the 270-kilometre final stretch of track between Gillam and Churchill was suspended on Friday due to “severe permafrost issues,” owner Omnitrax Canada said in a release.

The move follows a derailment on June 2 just south of Churchill that knocked out freight service for a week before it resumed. Via Rail’s passenger service has been off ever since the accident.

The rail line is frequently hit with disruptions. But a hotel co-owner in Churchill said Monday this year has been the worst she’s seen in her five years in business.

“Everything for our restaurant—beer, food, you name it—it all comes on the railway line,” Belinda Fitzpatrick said.

“Right now, we have what we have in the fridges and in stock, and we’re not sure when we’re going to get any more.”

Some of the guests Fitzpatrick was expecting at the Tundra Inn have already cancelled, she said. Others are trying to find an airline flight—the only other way of getting to the remote town on Hudson Bay.

The rugged sub-arctic terrain has long been a problem for the rail line. In 2007, Prime Minister Stephen Harper travelled to Churchill to announce $60 million for repairs and another $8 million for the Port of Churchill.

The rail line is expected to see increased traffic of grain shipments and other goods due to growth at the port and a longer ice-free season.

Omnitrax also wants to conduct test runs of crude oil shipments along the line, although the plan has met with strong opposition from environmental groups, the Manitoba government and others who fear a spill would be disastrous for the environment.

Figures from the Transportation Safety Board of Canada show there were 63 accidents on the rail line between 2003 and 2012. All but 10 were derailments.

On the weekend, Omnitrax said several days of repairs would be required before freight service could resume. Fitzpatrick expressed frustration at not having a clear timeline.

“We don’t know what the problem is. We don’t know exactly where it’s coming from and how long it’s going to take to get fixed.”