European Airbus planes are now made in the USA 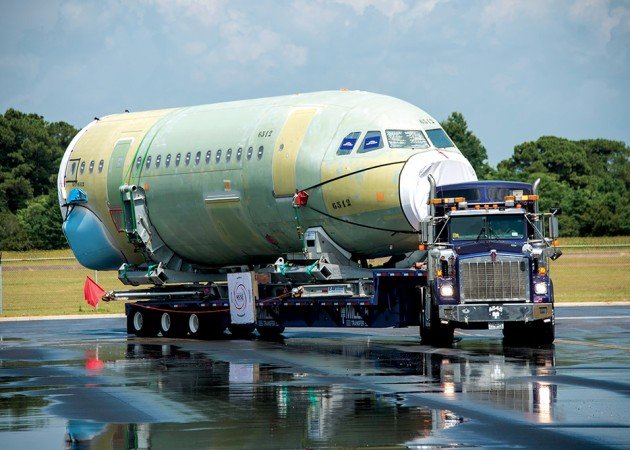 The first A320 forward fuselage that arrived by vessel from Germany being trucked from the port to the Airbus Mobile facility on Sept 10th, 2015

Aircraft manufacturer Airbus inaugurated its first US assembly plant in Mobile, Alabama, on September 14 this year. Located alongside the Mobile airport on a 215,000-square-metre footprint, this brand-new plant is scheduled to deliver its first A320 in the spring of 2016 and reach four A320s monthly by 2018.

The European Airbus consortium was born in 1967 during a meeting of ministers from France, Germany and Britain at a time when Boeing dominated the industry.
Britain eventually pulled out and Spain became a partner in the project in 1971. Airbus’s first aircraft, the A300 twin-engine short- to medium-range wide-body passenger jet, flew its inaugural flight in Toulouse, France on October 28, 1972. 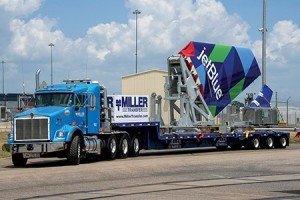 A tail for a jetBlue plane is trucked from the port to the Airbus Mobile facility.

By the 1990s, the competition between Airbus and Boeing resulted in a duopoly in the large jet airliner market, as Boeing absorbed its rival, McDonnell Douglas in 1997 and other manufacturers, such as Lockheed Martin, Convair, Fairchild, British Aerospace and Fokker withdrew from this market.

Today, although the figures vary as new models come on stream, Airbus and Boeing account for approximately 85 percent of the market, with the smaller Bombardier, Embraer, Tupolev and Comac sharing the balance.

This comprehensive range enables Airbus customers to build a fleet with maximum flexibility, operating similar aircraft across the whole range of sectors, switching cross-qualified pilots and crews on short notice according to needs. This reduces maintenance costs as well, a significant benefit for airlines. 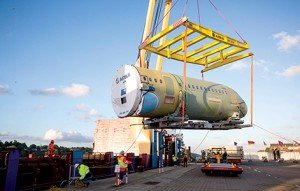 An A320 forward fuselage being lifted from a vessel at the port of Mobile. Notice the specially-built cradle on which the fuselage will rest until it is moved to the actual assembly line. These cradles are returned to origin afterwards and are
re-used to carry subsequent fuselages.

Having its first production lines split between two countries, France and Germany, with major components originating as well from the UK and Spain, and a worldwide array of suppliers, Airbus had to operate first-class supply chain management from day one.

Final assembly lines are located in Toulouse, France (A320) and in Hamburg, Germany (A321, A319 and A318). A third assembly line began operations in Tianjin, China in September 2008. The first jetliner completed at the Tianjin facility had its maiden flight in May 2009 and was delivered to Sichuan Airlines the following month.

Major components are usually shipped from manufacturing sites to final assembly plants by sea. When time is critical, Airbus can airlift them with its own fleet of purpose-built air freighters called the A300-600ST and nicknamed the “Beluga”, because of its resemblance to the white Arctic whale. Airbus currently operates five of these super-sized transporter jets, flying components and parts between the UK, Spain, France, Germany and China.

So the inauguration of an Airbus final assembly plant in Alabama in September illustrates their strategy of building additional capacity to reduce lead times, increase flexibility and get closer to market. Alabama was selected thanks to its aerospace expertise, competitive labour force and its world-class port in Mobile, capable of handling aircraft fuselages arriving by vessel from Airbus’s Hamburg site. 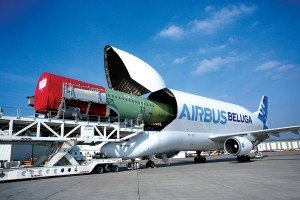 Having some production costs in US dollars is also advantageous for Airbus as it provides protection against exchange rate fluctuations, since worldwide aircraft sales are generally labelled in US dollars. Of course, another reason for making this US$600 million investment across the Atlantic is the marketing benefit with US airlines of being a “local” manufacturer.

The US market is huge, as several airlines need to renew their aging fleet and the market for single-aisle aircraft of the A320 type is estimated at over 4,700 new planes in the next 20 years. Airbus’s and Boeing’s worldwide market share are very close but Boeing remains the market leader in the US, where Airbus only has about 20 percent share. However, their objective of 50 percent appears reachable as they are currently getting around 40 percent of new US orders.

Airbus already has several US airlines as customers, the biggest ones being Delta Airlines and United Airlines and the first A320 scheduled to come out of the Mobile assembly line is destined to jetBlue, with the second going to American Airlines.

Boeing has meantime embarked on a similar strategy, as it agreed, during the visit of President Xi Jinping to the US in September, to build a B737 final assembly plant in China.

— Following an international freight forwarding career of over 30 years in Europe and in Canada, Christian Sivière now runs a consultancy, Import Export Logistics Solutions/Solimpex. He lectures at Collège Marie-Victorin in Montréal, for the Canadian International Freight Forwarders Association in Toronto, and for other trade organizations.